Alexa is an Amazon that prefers reading to fighting.

Although born and trained in the Amazon way of fighting, Alexa was far from the usual Amazonian warrior. Preferring to plunge her brain into a book rather than a sword into a body, Alexa's knowledge was unsurpassed. However, as intelligent as she was, she was tricked by one of her fellow sisters, Persephone and murdered in an effort to allow Ares to escape.

Alexa later returned to life in an epic battle where Ares called to life all the fallen Amazon warriors to rise as zombies. Though controlled by Ares, Alexa was able to recount an incantation that would remove herself and the other Amazon's from Ares control. It wasn't until Artemis, who was sparring with the zombie Alexa at the time, picked up on the words that were being said were the other Amazon's freed from the mind control. Alexa explained that while the incantation she was saying was correct, those possessed cannot free themselves. Alexa eventually turned the army of undead on Ares, but with a small whisk of his hand, Ares returned the undead army to the ground along with Alexa, who turned to ash in Artemis' arms. 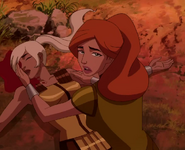 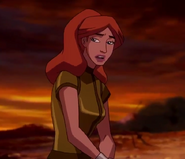