"We know better now, don’t we? Devils don’t come from hell beneath us, they come from the sky."
―Lex Luthor[src]

Alexander Joseph "Lex" Luthor, Jr. is the owner of LexCorp.

During Superman and General Zod's battle throughout Metropolis, they passed LexCorp tower and multiple LexCorp tankers.

In order to carry out his plan, Lex employs Anatoli Knyazev and his men, arms them with innovative alloy bullets, and orders them to murder all of the Nairomian terrorists and their warlord Amajagh as soon as Superman arrives (to save a captured Lois Lane), and for Knyazev to mutilate the corpses with his flamethrower,in order to make it look like Superman had murdered them with his heat vision.

Shortly thereafter, Lex hires and blackmails a Nairomian woman, Kahina Ziri, to lie and testify against Superman's actions in Nairomi to the US Senate, giving her a specific script to follow when speaking to Senator Finch. Hence, Kahina claims that her parents were among those killed in the incident after Superman's involvement.

Lex Luthor himself is visited at LexCorp Industries by senators Finch and Barrows, and he proposes to them the idea of using the recently acquired Kryptonite xenomineral as an official "silver bullet" deterrent against Superman, to hold him in check if the alien superhero were to ever decide to turn against humanity. In order to forge such a "silver bullet", Lex requests Finch to grant him an import license for the large piece of Kryptonite (nicknamed "Emerald City" by Lex) lying in the Indian Ocean (at the wreckage of General Zod's World Engine). Finch leaves, considering the request, while Barrows stays, clearly intrigued by Lex, and intent to continue the discussion.

Lex quickly manages to persuade the good-natured senator Barrows to grant him access to the Fortress of Solitude and to the corpse of General Zod. Lex rewards the cooperative politician with the cherry-flavored Jolly Ranchers, and is quick to exploit his new access-taking a good look around the Fortress, and subtly peeling the fingerprints from General Zod's corpse (with a Kryptonite-bladed scapel).

Shortly after the formation of the Justice League, resurrection of Kal-El, and defeat of Steppenwolf, Lex responds by deciding that this is the optimal time to enact his contingency to escape Arkham Asylum. To keep the guard none the wiser, Lex somehow had another bald inmate put in his place - inside a straight-jacket.

With the help of off-shore accounts with spare money, Lex retreated to a lavish private yacht, with a group of female bodyguards. Shortly thereafter, Lex contacted the notorious mercenary Slade Wilson, inviting him to his boat. Deathstroke, however, was cold upon arrival, warning Lex not to waste his time. Lex, however, calmly pointed out that upon "God's" return, the latter and his allies had formed a league, so he inquired if the Deathstroke wished to join in the new "league of [their] own" that Lex was building in response. 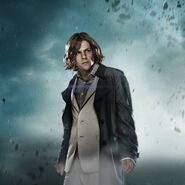 Lex meeting with Deathstroke.
Add a photo to this gallery

Retrieved from "https://dcmovies.fandom.com/wiki/Alexander_Luthor,_Jr.?oldid=131298"
Community content is available under CC-BY-SA unless otherwise noted.