"That’s how it starts. The fever. The rage. The feeling of powerlessness that turns good men cruel."
―Alfred Pennyworth[src]

In 1981, the Waynes were murdered by a mugger, whilst taking a young Bruce to see a showing of "The Mark of Zorro" at the Aragon Theater, and Alfred was placed as the legal guardian to Bruce. The young boy's anger at the death of his parents and the blame he placed on himself was apparent to see, and he proclaimed that he would rid Gotham City of the criminal and the corrupt, and asked Alfred for his help.

Bruce would stay true to his word, eventually becoming the vigilante Batman as an adult, with Alfred's SAS training allowing him to help Bruce build his numerous high-tech gadgets, to operate the Batcomputer, and to give Bruce pertinent advice during the latter's missions in his one-man anti-crime crusade.

18 months after the Black Zero Event, and 20 years after becoming Batman, Alfred and Bruce continue their mission to combat organized crime in Gotham City as well as preparing countermeasures against the perceived threat of Superman. Alfred operates on the Armored Batsuit while he and Bruce discuss Anatoli Knyazev and his connection to the "White Portuguese"; though Alfred himself speculated that this person might not even actually exist, instead being a mere "phantasm".

When Bruce Wayne is invited to a social gathering by Lex Luthor, Alfred guides him via earpiece through Lex's mansion and plants a data drive in Lex's computer servers to extract information regarding the "White Portuguese". However, Diana Prince steals the drive and leaves before Bruce or Alfred could decrypt it.

Later, after Diana returns the drive to Bruce, he decrypts the drive and tells Alfred that the " White Portuguese" is actually the name of a ship carrying a large nugget of Kryptonite from the wreckage of the World Engine to Lex Luthor, which is capable of significantly weakening Superman. Alfred vehemently protests Bruce's decision to combat Superman, believing that he is not an enemy of humanity. He pleads to Bruce to change his mind, saying that it would be suicide to try to kill the Man of Steel, though Bruce remains stubborn.

When the Capital bombing occurs, Alfred sees it on the news in the Glasshouse and also sees the checks that Wallace Keefe sent back with hate messages. Alfred realizes that Bruce has snapped, and can only look on as the latter prepares for his battle.

With his physical preparation complete, Bruce retreats to mentally prepare for his duel with Superman at the abandoned Wayne Manor, where he is found by Alfred, who once more attempts to implore Bruce to stop, claiming that Bruce cannot win such a confrontation, with it being "suicide". Bruce grimly responds saying that he is now older than his father Thomas Wayne had ever been, and that this might be the only thing that he does which actually matters, since despite Batman having defeated numerous Gotham City criminals and supervillains over the last 20 years, "criminals are like weeds", in that if 1 is pulled up, another grows in its place. While Superman has the potential to become the most formidable supervillain in history, taking him down before that happens is "about the future of the world", something Bruce sees as "[Batman's] legacy". Bruce then grimly muses at how his father had once told him that despite the Wayne Manor itself being built on railways, real estates and oil, the first generation of Waynes had made their fortune as hunters, trading pelts and skins with the French. Thus, Bruce not only hopes to live up to his father by taking Superman down, but also feels kinship with his ancestors, as a hunter of sorts. As Bruce walks away, Alfred, understanding that trying to stop the former is hopeless, bitterly remarks "So falls the House of Wayne."

After the fight between Batman and Superman is resolved, Alfred tracks down Knyazev's cellphone to a portside warehouse in Gotham where Martha Kent is being held. Batman flies the Batwing towards the safehouse, and Alfred scans the warehouse to find 24 mercenaries on the third floor guarding Martha. He then takes remote control of the Batwing and lands Batman on the second floor, who then proceeds to neutralize all the men, seemingly kill Knyazev, and rescue Martha. 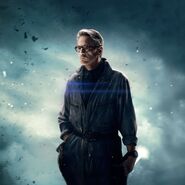 Retrieved from "https://dcmovies.fandom.com/wiki/Alfred_Pennyworth_(DC_Extended_Universe)?oldid=131630"
Community content is available under CC-BY-SA unless otherwise noted.