"It's taken me some time, but I finally have them. The worst of the worst."
―Amanda Waller [src]

Amanda Waller is a government official responsible for bringing the Suicide Squad together. 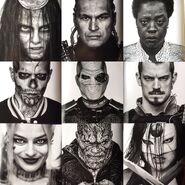 Retrieved from "https://dcmovies.fandom.com/wiki/Amanda_Waller_(DC_Extended_Universe)?oldid=133161"
Community content is available under CC-BY-SA unless otherwise noted.