Batman: Mask of the Phantasm

Gotham City crime lord Chuckie Sol is killed by a mysterious cloaked figure shortly after Batman bursts in on the meeting. Due to their similarity of appearance, Batman is blamed for the death. Councilman Arthur Reeves tells the media that Batman is an irresponsible menace, and demands that the city's police take action against him. Commissioner Gordon insists that the killing cannot be Batman's fault, but Reeves is adamant.

Later, Councilman Reeves attends a party at the mansion of billionaire Bruce Wayne, Batman's alter ego. Reeves jokingly taunts Bruce for his bad luck with women and for having allowed an old girlfriend, Andrea Beaumont, to get away.

In a flashback to Bruce's college days, we see him meet Andrea in a cemetery while visiting his parents' grave. Bruce has vowed to avenge his parents' murder by dedicating his life to fighting crime. He dons a mask and black ninja-styled outfit and foils an armored car robbery, but is discouraged that the criminals do not fear him. Around the same time, he begins a romance with Andrea. Eventually, Bruce decides to quit his plan on becoming a crime-fighter and proposes marriage to Andrea. Andrea mysteriously leaves Gotham with her father, ending her engagement to Bruce in a Dear John letter. Believing that he has lost his only chance of having a normal life, Bruce finally dons the mask of Batman.

In the present, the killer finds and kills another gangster, Buzz Bronski. Batman discovers evidence linking Andrea's father with a number of organized crime figures. The killer later targets Salvatore Valestra, the mob boss for whom both Sol and Bronski once worked as enforcers, but is beaten to the punch by the Joker, whom Valestra had foolishly consulted for help; Batman is blamed again and has a close call with the police after a brief confrontation with the killer. Rescuing Batman in her car, Andrea explains that she and her father had been hiding in Europe, from the Valestra mob, to whom he owed a lot of money. Carl Beaumont eventually repaid them, but that did not satisfy them. Batman believes that Andrea's father may be the killer, until he learns from Reeves (who now knows Batman is innocent) that Beaumont was murdered some time before.

In a tussle with the Joker, the killer is revealed to be Andrea herself, intent on avenging her father's death by killing the mobsters to whom he owed money and who ordered Beaumont murdered. The Joker is also revealed to be the last surviving member of the Valestra mob: an unnamed hitman who personally murdered Beaumont for Valestra. During the course of their struggle, Batman arrives. Bruce begs Andrea to give up her desire for revenge but she refuses stating that they ruined her chances with Bruce and that he himself is constantly fighting for revenge. Andrea vanishes and Batman battles with the Joker in a miniaturized replica of Gotham City. After a protracted battle, both the Joker and Andrea vanish in the confusion of fire and smoke, with Batman barely escaping into a waterway before a series of rigged explosions.

Back in the Batcave, a heartbroken Bruce receives consolation from Alfred stating that no one could have helped Andrea. Bruce finds the locket with Bruce and Andrea in it in the cave. Meanwhile, Andrea stands on the deck of an ocean liner, alone. The final scene shows Batman now permanently alone standing on top of a building, still in grief. The Bat-Signal emerges in the distance and Batman flies into action to continue his crusade against crime. 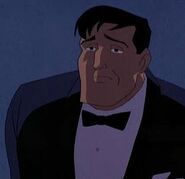 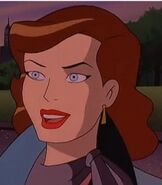 Andrea when she met Bruce. 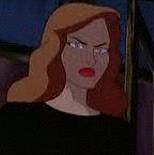 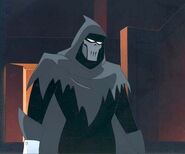 Joker before his accident.