Batman: Mystery of the Batwoman

A new hero has arrived in Gotham, but as the title suggests, her identity is a mystery—even to Batman. During patrol, the Dynamic Duo after spots her trying to stop one of Penguin's shipment on Gotham's interstate and apparently would use lethal force after seeing her using a plasma rifle sending Penguin's truck with its driver off the bridge. Batman and Robin saves the driver from falling to his death. Batman must figure out who Batwoman is and to stop familiar enemies Penguin and Rupert Thorne from selling illegal weapons to the fictional nation of Kasnia. At the beginning of the story, the two employ Carlton Duquesne, a gangster, to provide protection.

Batwoman's main focus is on illegal activity by the Penguin, Thorne, and Duquesne. Despite taking the symbol of the Bat as a sign of justice, Batwoman sullies the Bat prefix by taking out criminals with ruthless and dangerous techniques. She seems uninterested in sparing the lives of her adversaries.

Batman, with Robin, sets out to stop the Batwoman from making mistakes as she tries to take out the villains, and as he encounters numerous twists, setbacks, and apparent false leads in determining her true identity. The newest gadget on display is a wind glider used by Batwoman that utilizes some of the most advanced technology ever seen in Gotham City. Bruce Wayne, Batman's alter ego, also becomes involved with a new lady in his life: Kathy Duquesne, the crime boss's daughter.

In addition to Kathy Duquesne, Bruce is introduced to two other women who, as his investigation continues into who the Batwoman is, seem to fall well into suspicion: Dr. Roxanne "Rocky" Ballantine, a new employee of Wayne Tech whose technology development is used by the Batwoman against the Penguin; and by Detective Bullock's new partner Sonya Alcana, whose knowledge of the weapons being smuggled by the Penguin and Carlton Dunquesne is much greater than the detective should know.

With Carlton Dunquesne unable to stop Batwoman's raids on the various facilities used to hold the various weapons, the Penguin calls Bane for additional support to ensure that there are no more losses as a result of the Batwoman. Not long after Bane's arrival in Gotham, it is revealed that there is not one but three Batwomen, all of whom were the women suspected by Batman; Kathy and Sonia met taking art classes at college and Sonia and Rocky were roommates. They had taken turns to remove suspicion on any one of the three, while using Roxanne's technological genius and contempt for the Penguin (who had framed her long-time boyfriend), Kathy's money and access to several key aspects of her father's organization (and desires her father's criminal career would end as it led her mother being killed), and Sonia's physical and police skills to ensure that Thorne's operation is thwarted (as the crime lord previously left her family in financial ruins after arsonists who worked for him burned down her parents' shop). Alcana was also saved by Batman nine years prior of the film, which the event also would given the detective an inspiration of her shared costume identity with her friends.

In the final confrontation on a ship taking the weapons into international waters for the exchange, the ship is destroyed by a bomb planted by Kathy, with her and Batman narrowly escaping the explosion despite the efforts of Bane. At the conclusion, Carlton agrees to testify against Thorne and the Penguin after saving Kathy's life during the ship's destruction, Kathy drives off with Bruce, Rocky's fiance is cleared thanks to evidence discovered by Batman, and the GCPD are left to assume that Sonia is the only Batwoman after she helps rescue Batman from the ship, Sonia resigning from the police due to the potential problems her presence could cause and decides to leave the city. 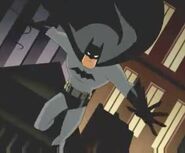 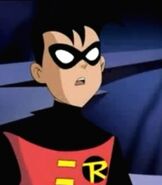 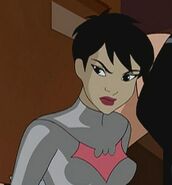 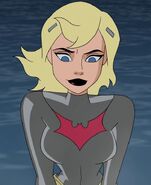 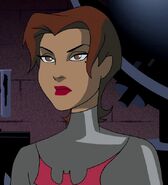 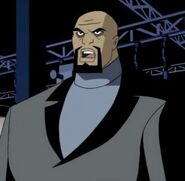 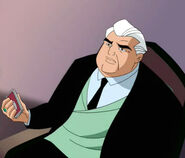