Batman: The Dark Knight Returns Part 1 is the eleventh animated film in the Batman animated film series. It is based loosely on Frank Miller's 1986's story arc of the same name.

In a dystopian near-future version of Gotham City, 55-year-old Bruce Wayne has retired from being Batman following the death of his former Robin Jason Todd. Criminals now run amok and the city is constantly terrorized by a gang known as the Mutants. Bruce Wayne is now something of a recluse, despite his continuous philanthropic endeavors and friendship with Commissioner James Gordon (who now knows Bruce's former identity as Batman).

However, the escalating brutality of the Mutants prompts Bruce to take up the mantle of Batman again, but the public opinion over Batman and his methods is sharply divided. While the public generally approve of Batman's return, richer and more powerful people such as the Mayor and Dr. Bartholomew Wolper (head psychiatrist at Arkham Asylum) brand Batman as a fascist. Bruce's old friend Harvey Dent (formerly Two-Face) undergoes plastic surgery and his face is repaired but at the high cost of eradicating Dent's good side forever. Batman confronts Two-Face and stops him holding the city ransom with a bomb.

Encouraged by Batman's actions, 13-year-old girl Carrie Kelley buys herself a Robin costume and searches for Batman to aid him. She finds him at the city dump where the Mutant gang is gathering. Onboard a tank-like Batmobile Batman defeats most of the gang shooting them with rubber bullets before confronting the Mutant Leader in to a hand to hand combat where he is overpowered but Kelley distracts him long enough for Batman to pacify him and rescue the injured Batman. Kelley attends to Batman's wounds as the vehicle drives toward the Batcave. Once home, Batman takes Carrie on as the new Robin despite the objections of his butler Alfred Pennyworth. Batman instructs Carrie to disguise herself as a Mutant and spread the word of a meeting at Gotham Pipe while Batman arranges the Mutant Leader's escape from prison. The Mayor attempts to negotiate with the Mutant Leader in his cell, but the Mutant Leader brutally mauls him to death. Gordon then "accidentally" allows the Leader out of his cell and he makes his way through the ventilation system leading him to Gotham Pipe where he finds his entire army waiting. Batman appears and engages the Mutant Leader in battle again. Only this time, Batman manages to outsmart the Leader's moves and eventually subdues him, breaking several of his bones in front of his army. Accepting defeat, the Mutants disband into smaller gangs. One gang in particular operates under the name of "The Sons of Batman" where they work to purge Gotham of crime with questionable methods.

Batman's return and victory over the Mutants becomes public news. Nearing retirement, Gordon meets with his successor Police Captain Ellen Yindel who also voices her doubts over Batman's methods. Meanwhile in Arkham Asylum, a catatonic patient sees Batman on the news. With a disturbing grin on his face, he ecstatically exclaims the phrase "B-B-B-Batman, darling." 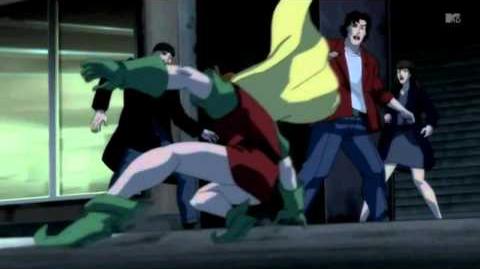