Feigning regret for his past, Joker convinces Dr. Wolper to take him on a talk show to tell his story; he makes plans for his escape with his old henchman who supplies him with mind-controlling lipstick. Meanwhile, Superman - who works as a government operative in exchange for being allowed to covertly help people - is asked by the President to end Batman's vigilantism. Framing these events is a growing hostility between the USA and the Soviet Union over possession of the island of Corto Maltese.

As Batman's continued presence humiliates the national authorities, Yindel becomes commissioner and orders Batman's arrest. Superman warns Batman that the government will not tolerate him much longer. Joker makes his talk show appearance as Batman fights with the GCPD on the studio roof; while they fight, Joker kills Wolper and gasses everyone in the studio to death and escapes. He finds Selina Kyle and uses one of her escorts and his lipstick to take control of a congressman and make him call for a nuclear strike on the Soviets before falling to his death.

Batman's investigation leads him to Selina Kyle, who he finds bound and dressed like Wonder Woman. Robin notices cotton candy on the floor and Batman deduces Joker is at the fairgrounds. There, Robin accidentally kills Joker's attacking henchman while Batman pursues the Joker, who indiscriminately guns down dozens of people. As Batman corners a wounded and partially blinded Joker, he admits to feeling responsible for every murder Joker has committed and intends to stop him permanently. The pair fight, which ends in Batman being stabbed repeatedly and him breaking Joker's neck in front of witnesses. Content that he made Batman lose control and that he will be branded a murderer, the Joker finishes twisting his neck, killing himself. The GCPD arrive and the profusely bleeding Batman fights his way to Robin and escapes as the Joker's body burns in flames.

After Superman deflects a Soviet nuclear missile, he is hit with the blast and badly injured; the detonation creates an electromagnetic pulse that wipes out all electrical equipment in the United States and causes a nuclear winter. As the city descends into chaos, Batman, Robin, and Gordon rally the Sons of Batman and the citizens of Gotham to restore order, and Yindel accepts that Batman has become too powerful to take down. While the rest of the powerless America is overrun with crime, Gotham becomes the safest city in the country, embarrassing the President's administration and causing them to send Superman to finally stop Batman; Batman and Superman agree to meet in Crime Alley. Wearing a powerful exoframe and supported by Kelley and former Green Arrow Oliver Queen, Batman fights Superman, using various tactics to make the fight even. When Superman gains the advantage, Queen hits him with a Kryptonite arrow that severely weakens him. Batman beats Superman and claims that he intentionally made the Kryptonite weak, only wanting to be the man who beat Superman. Batman then dies of a heart attack while Wayne Manor self-destructs and Alfred dies of a stroke.

In the aftermath, the world learns that Bruce Wayne was Batman; all of his secrets are destroyed with the manor and his finances have disappeared. As Superman leaves Bruce's funeral, he gives Kelley a knowing wink after noticing a faint heartbeat. In the underground caves beneath the ruins of Wayne Manor, Bruce is revealed to have faked his death and makes preparations to continue his mission more discretely, allied with Kelley, Oliver and his followers. Bruce states that this will be a good life, "good enough". 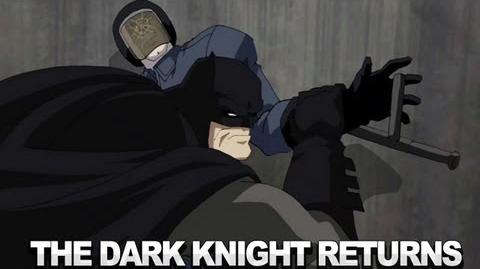