Batman: Under the Red Hood is the ninth animated film in the Batman animated film series. It is based loosely on Judd Winick's 2005's story arc of the same name.

Ra's al Ghul hires the Joker to help him with his latest terrorist scheme, but soon regrets it when the Clown Prince of Crime kidnaps Jason Todd, the second Robin. In a warehouse in Sarajevo, Bosnia, the Joker beats Jason with a crowbar, ultimately leaving him half-dead on the warehouse floor. Jason tries to get out, but the Joker put a lock on the door. He then sees a bomb ticking in the warehouse. Batman arrives too late, and Jason is killed in the explosion.

Five years later, in Gotham City, the vigilante/crime lord Red Hood has assembled a meeting with the city's top-earning thugs and drug dealers. The Red Hood announces his takeover of the drug trade and tells them to give him 40 percent of their earnings in return for protection from both Batman and Black Mask, but he also tells them not sell their drugs to children. As a warning, he tosses them a bag containing the severed heads of all their lieutenants.

At the docks, Batman chases some thugs in a moving truck and crashes it into a wall. He tries to interrogate them until the box that was in their truck opens and reveals Amazo, a powerful android with the ability to copy the abilities of every metahuman it encounters. Nightwing (Dick Grayson), who was once the first Robin, arrives on the scene to help him. After a short fight, the robot is defeated and Batman interrogates the three thugs at the location and finds out they are working for the Red Hood. The Red Hood then kills the thugs with a sniper rifle. Batman chases the Red Hood, who leads him to the Ace Chemical Plant — the site of the first Red Hood's transformation into the Joker. The current Red Hood rigs an explosion in the plant and escapes.

Later in the Batcave, Nightwing appears, having returned after he learned of the Red Hood. Batman tells Nightwing that since the Red Hood began his reign of terror, drug trafficking has gone up, but crime has gone down. Batman and Nightwing proceed to Arkham Asylum to interrogate the Joker about the Red Hood. The Joker taunts Batman by reminding him of Jason's death, tempting Batman to kill him, then denies any involvement with his successor.

At his headquarters, Black Mask is angry because his "Amazo" was destroyed, and promptly puts a hit out on the Red Hood. A lackey starts to talk about the next incoming shipment; however, both Batman and the Red Hood have bugged the place, listening in on the conversation. The Red Hood shows up and hijacks a helicopter, but is stopped by Batman and Nightwing. The Red Hood runs and Batman chases him. Nightwing later joins up with Batman and the chase leads to a blimp and rooftops. Nightwing takes notice that the Red Hood is able to evade Batman at every turn, including cutting a Bat-lasso before it went taut on his leg. The chase leads to a train station above ground, and an explosion occurs facilitating the Red Hood's escape and leaving Batman and Nightwing temporarily shaken.

Batman and Nightwing regroup in the Batcave, with Batman's butler, Alfred Pennyworth, bandaging Nightwing's right leg and taking him home. Batman and Nightwing agree that the Red Hood's skills, methods, and arsenal are comparable to their own, except that the Red Hood is willing to kill to get what he wants. However, there's something else that troubles Batman, and he stays on his computer monitor to watch the video footage of the chase from the cowl's camcorder, trying to figure out what the Red Hood said at the train station. It reveals that the Red Hood said, "You haven't lost your touch, Bruce," meaning that he knows Batman's true identity. Batman recalls Jason performing the same maneuver he had seen the Red Hood use: Cutting a lasso on his leg before it went taut. In addition, a flashback reveals that as he got older, Jason grew more violent, even shattering a drug dealer's collarbone during one of their patrols.

At one of the Red Hood's protected areas, a shootout by Black Mask's henchmen occurs with an intrigued Red Hood watching from afar. At another location, one out of eight of the crime bosses following the Red Hood is being beaten and about to be burned when the Red Hood intervenes. However, it is actually a trap, and a group called "The Fearsome Hand of Four" attacks the Red Hood. The Red Hood is beaten, but he admits his intervention was merely a stall tactic. Batman appears and the two adversaries take on the group together. When one of the four gains the upper hand on the Red Hood, the Red Hood kills him with an electric taser. They have an argument over how to fight crime, leading Batman to ask what has happened to him, hinting that he knows his opponent's true identity. However, the Red Hood replies that it is too late for Batman to help, and leaves. Batman manages to obtain a blood sample from the Red Hood at the scene of the battle, and the analysis is a match to Jason Todd.

Back at the Black Mask's headquarters, Black Mask is given the news that his shipment has been destroyed by the Red Hood and flies into a rage and attacks his own body guards. A laser sight then trains on his forehead. From afar, the Red Hood waves and shoots a rocket into Black Mask's room. Black Mask survives and is forced to call on the Joker, setting him free and giving him the task of killing the Red Hood.

Back at Wayne Manor, Bruce digs up Jason's grave site and finds a fake body made of high-end latex. Enraged, he goes to Ra's al Ghul's mansion and demands the truth about Jason. Ra's reveals that he switched Jason's body and revived him in his Lazarus Pit because he felt responsible for the boy's death; Ra's was the one who hired the Joker as a distraction for the Dynamic Duo in Bosnia while he tried to cripple the world economy by destroying financial districts in Europe. Following his resurrection, Jason escaped. Ra's had been trying to find Jason for years, until he heard the news from Gotham of him becoming the Red Hood. Ra's promises to stay out of any further conflicts between Batman and the Red Hood, ruefully saying that he's "done enough".

On his way back to Gotham, Batman finds that the Joker has abducted all eight of the Red Hood's crime bosses, including Black Mask and his assistant, on the bridge. The Joker starts to pour gasoline on the hostages in a large truck container, and as he is trying to light it, the Red Hood appears and reveals that the Joker is his real target; all of the attacks he made on Black Mask were to get him desperate enough that he would seek aid from the Joker and arrange his escape from Arkham. The Joker sets the hostages on fire. From out of nowhere, Batman swoops in and deploys fire retardant to stop the fire and tries to take the Joker out with him. The Red Hood grabs onto the Joker and cuts the wire holding them, sending the Joker into the river.

Red Hood tells Batman to come to Crime Alley if he wants the Joker back. Showing up at an abandoned apartment, the Red Hood tosses the Joker on the ground and starts to beat him with a crowbar. By the time Batman arrives, the Red Hood is finished and waiting for Batman to arrive. Red Hood and Batman fight it out and end up on a rooftop of a church. The Red Hood takes off his helmet and reveals he truly is Jason Todd. After another short fight, Jason jumps through a window and back in the room where the Joker is being held. Jason confronts Batman, saying that he had forgiven him for not saving him, but is furious that he still allows the Joker to live. Batman confesses that he always wanted to kill the Joker, but will not allow himself the pleasure because there would be no going back. Jason then tosses Batman a gun and tells him he must shoot the Joker or him. Batman refuses and turns his back. Enraged, Jason then shoots at Batman; he misses, however, and Batman throws a small batarang into the barrel of the gun. The gun explodes, incapacitating Jason. Jason then sets off a bomb he had previously planted in the room. The Joker maniacally attempts to stop Batman from defusing it so he can finally "be the only one who gets what he wants" that night, but Batman ultimately subdues him. The bomb goes off, and this time Batman succeeds in saving Jason's life from the explosion; nevertheless, Jason is nowhere to be found.

The Joker is returned to Arkham Asylum and Black Mask is set free on a million dollar bail. Alfred asks Batman if he should remove the memorial display case containing Jason's Robin uniform. Batman replies that nothing has changed between Jason and him and departs in the Batmobile. A quick flashback is shown of Jason Todd's first day in his Robin costume, happily jumping onto the Batmobile and declaring that it is the best day of his life. 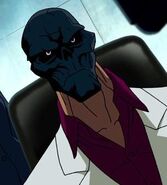 Batman: Under the Hood IMDB

Retrieved from "https://dcmovies.fandom.com/wiki/Batman:_Under_the_Red_Hood?oldid=133013"
Community content is available under CC-BY-SA unless otherwise noted.