Batman is a 1989 film that introduces Batman and features the birth of The Joker. A sequel, Batman Returns, was released in 1992.

The Joker's rise to power

Approaching its 200th anniversary, Gotham City's leaders fear that the high level of criminal activity will deter citizens from attending the celebrations. Gotham's mayor William Borg orders District Attorney Harvey Dent to make the city safe again, in hopes of revitalizing local business. Dent, in turn, targets mob boss Carl Grissom, who sponsors much of the criminal activity within Gotham and has paid off a significant segment of the police force.

Meanwhile, a dark vigilante dressed as a bat has attracted the attention of both the police and the local media. Newspaper reporter Alexander Knox is attempting to investigate, but his questions are deflected by skeptical cops, including Lt. Eckhardt, one of many police officers on the take from Grissom. After stonewalling Knox, Eckhardt is shown taking a payoff from Grissom's second in command, Jack Napier.

Grissom, on discovering that his mistress is involved with Napier, sets him up to be killed by Eckhardt in a raid on Axis Chemicals. The plot is foiled by the arrival of Police Commissioner James Gordon, who wants Napier taken alive, and Batman. Batman captures Napier, but releases him when Bob the Goon holds Gordon hostage at gunpoint. Batman vanishes, and in the confusion, Napier shoots and kills Eckhardt, then attempts to shoot a re-emerged Batman. The latter deflects his shot, sending shrapnel into the former's face. Napier falls over a railing into a vat of chemicals, presumably to his death. Although surrounded by the police, Batman escapes the scene.

Batman, as we discover, is actually billionaire industrialist Bruce Wayne, an orphan who lives alone in the large mansion Wayne Manor, with only his butler Alfred Pennyworth in attendance. At a fundraising party, Bruce meets and falls for famous photojournalist Vicki Vale, recently arrived in town to cover the "Bat Man phenomenon".

Napier, in the meantime, is not dead but horribly disfigured, with white skin, green hair, and a permanent grin (after a botched reconstructive surgery attempt). Already erratic, the trauma has apparently driven him completely insane. Calling himself "The Joker", he kills Grissom and usurps his criminal empire. His first scheme is to spread terror in the city by creating hygiene products that can kill by fatal hilarity when used in certain combinations, laced with a deadly chemical known as "Smilex". Following the death of a news anchor on-air, the city becomes paralyzed with fear. Making war on several fronts, the Joker then sets a trap at the Gotham Museum of Art for Vicki, with whom he has become smitten; his fellows start to slash and deface the entire legacy of Western Art, but as one of them approaches to Francis Bacon's Figure with Meat, the Joker stops him saying "I kinda like this one, Bob. Leave it". The Joker then tries to disfigure our damsel in distress, at this point Batman descends in a shower of glass via the window ceiling and saves Vicki, to whom he then gives the secret of the Joker's chemical combinations. Batman renders her unconscious and she awakes at home. Incensed at Batman eluding him while taking Vale and ruining his poisoning scheme, the Joker vows to eliminate the mysterious vigilante for interfering with his plans.

Vicki's apartment is then the scene of a confrontation between the Joker, who has come to woo her, and Bruce, who has come to try and confess about his double-life but not getting very far. After Bruce challenges the Joker to a fight, the Joker pulls a gun and asks him: "Tell me something, friend. Have you ever danced with the devil by the pale moonlight?" He then shoots Bruce. The Joker then leaves amid his own hoopla, and Vicki is shocked to see that Bruce has disappeared, leaving behind only a metal platter which he used as an impromptu bulletproof vest.

The scene is set as Bruce realizes that the Joker is actually the man who murdered his parents many, many years ago in Gotham. The final clue was that his parents' murderer said the same phrase to him as The Joker said in Vicki's apartment ("Ever dance with the Devil by the pale moonlight?"). As Bruce grapples with this memory, he is shocked by the sudden appearance of Vicki in the Batcave; Alfred having decided that she deserved to know the truth.

Duel of the freaks

The Joker has put his own plans in motion to upstage the city's canceled anniversary celebrations with a grand spectacle: a nighttime parade at which he will dispense $20 million in free cash (in a comic book adaption this money is revealed to be fake as it has the Joker's face on it). Vicki and Knox are there to cover the pandemonium, and they notice strange tanks on the balloons. In the middle of his generosity, the Joker begins gassing the crowd. Batman arrives in his Batwing and snatches the balloons away to carry them out of the city. Furious, the Joker shoots Bob the Goon, his number one thug. Batman returns to make a strafing run on the Joker, who responds by shooting down the jet with an insanely long-barreled revolver. Vicki approaches the downed craft but is captured by the Joker, who leads her to the top of Gotham Cathedral. Dazed but not finished, Batman pursues. At the top of the cathedral, the two adversaries confront each other in single combat.

In a moment of opportunity, the Joker pulls Batman and Vicki off the belfry, where they cling to the ledge for their lives. as The Joker begins mocking them his helicopter appears and he grabs hold of a dangling ladder, about to escape. Batman shoots a wire around the Joker's leg, connecting it to a stone gargoyle on the ledge. As the Joker is lifted away, the wire pulls the gargoyle loose and he plummets to his death.

The movie ends with Commissioner Gordon announcing the Gotham police have arrested all the Joker's gang remnants who were not killed by Batman, and unveiling the Bat-Signal supplied by Batman with a note promising to return if the city needs him.

The film was shot in parts of England. 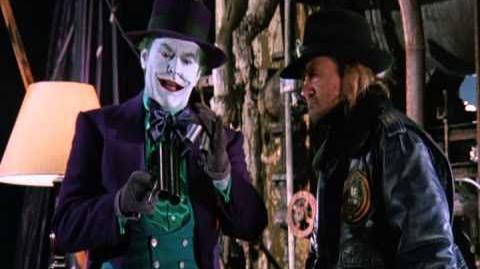 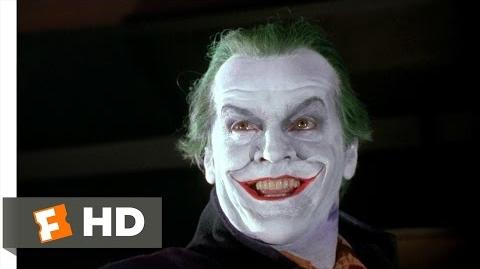 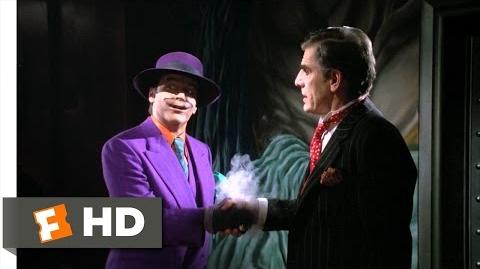 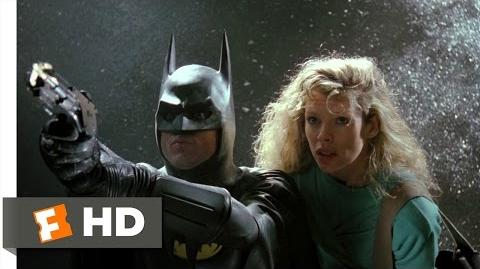 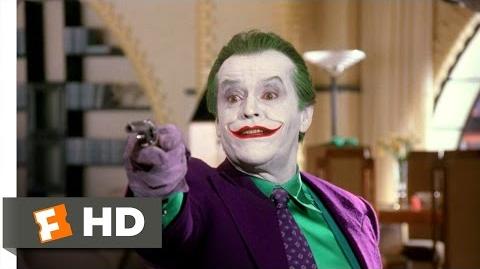 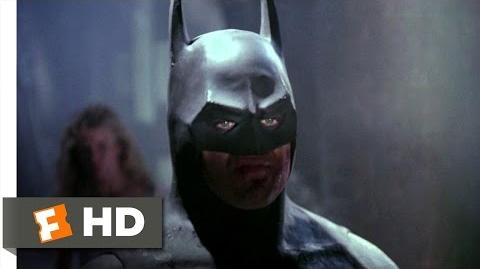 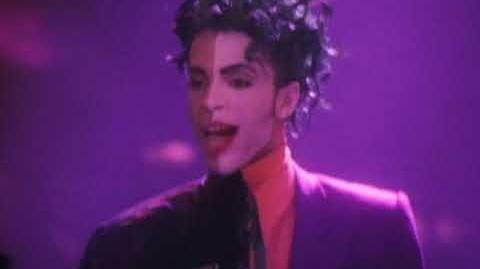 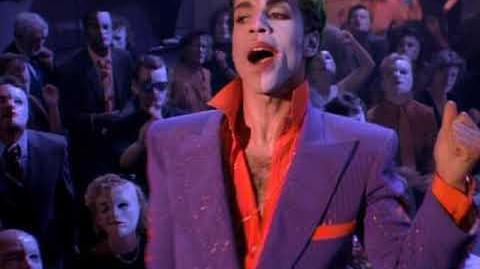 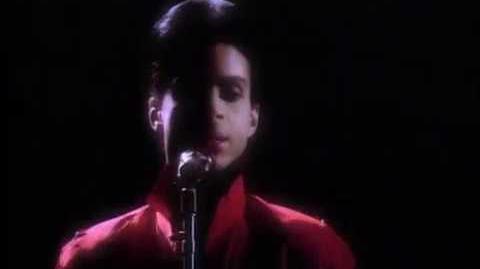