Batman Begins is a reboot of the entire Batman film franchise under the direction of Christopher Nolan. It revolves around Bruce Wayne journey into becoming The Dark Knight of Gotham City from crime and corruption . In his quest he encounters allies that aid him in his quest such as his loyal butler and confident Alfred, local police officer and friend Jim Gordon, fellow gadgetry and tech equipment specialist Lucius Fox and finally childhood friend Rachel Dawes. With the rises of Batman came enemies to challenge him such as Ra's Al Ghul and the Scarecrow.

As a young boy of 8 years of age, Bruce Wayne falls down a well, where he is caught in a swarm of bats. Bruce is rescued by his father Thomas, but he is left with a fear of bats. When Bruce and his parents attend the opera Mefistofele, Bruce is frightened by the portrayals of bat-like demons in the performance. He and his parents exit into an alley, where they are confronted by an armed mugger, Joe Chill, who shoots and kills Bruce's parents. Chill is arrested and convicted for the double murder, but Bruce is left traumatized by the incident. The family's butler, Alfred Pennyworth, raises Bruce in the absence of his parents.

When Bruce becomes a young man, he returns home to Gotham City from Princeton University, intent on killing Joe Chill, whose prison sentence is being suspended in exchange for testifying against the mob boss Carmine Falcone. Chill is assassinated by one of Falcone's henchmen, depriving Bruce of his opportunity. When Bruce tells his childhood friend Rachel Dawes about his foiled plan, she expresses disgust and gives him a lecture of the difference between justice and revenge. Realizing she is right, Bruce decides to confront Falcone himself, but the mob boss dismisses him as ignorant of nature of the underworld (Saying, "You're Bruce Wayne, the Prince of Gotham--you'd have to go a thousand miles to find someone who doesn't know your name!"), having his thugs rough him up. Realizing that Falcone is right, and that he cannot truly understand what he intends to fight as a wealthy playboy, he abandons his life at home, stowing away on a cargo ship and traveling the world for nearly seven years. He associates with criminals to learn their ways and is thrown in prison by police in China for theft, ironically of Wayne Enterprises property. After a prison brawl, an enigmatic man who identifies himself as Ducard invites Bruce to join an elite vigilante group, the League of Shadows, under the leadership of Ra's al Ghul. Bruce is freed the next day and travels to the top of a mountain to begin his combat training with the League. In his training, Bruce overcomes his fear of bats while under the hallucinogenic influence of a mountainside blue flower. Following his training, Bruce will lead the League in its fight to restore order to Gotham. When Ducard orders Bruce to execute a murderer as a final test, Bruce refuses to obey and destroys the League's headquarters, killing Ra's in the process. However, Bruce rescues an unconscious Ducard from the wreckage and leaves his mentor at a nearby village.

Bruce Wayne returns to a Gotham City that is mostly ruled by Falcone and begins plotting a one-man war against the corrupt system. He seeks the help of Rachel, now an assistant district attorney, and police sergeant Jim Gordon, who consoled him in the aftermath of his parents' murder. Bruce pays a visit to Gordon one night in disguise to establish communication. After reestablishing his connections to his father's company, Wayne Enterprises, Bruce is able to acquire, with the help of former board member Lucius Fox, a prototype armored car and an experimental armored suit. He augments the suit with League of Shadows armor, and a special cape that can become a rudimentary hang glider. One night, in his new costume, he disrupts a drug shipment by Falcone, and leaves the mob boss tied to a searchlight, forming a makeshift Bat-Signal. He also disrupts an assassination attempt on Dawes, leaving her with evidence against a judge that has gone soft on Falcone in the past. While investigating the "unusual" drugs in the shipment, Batman is stunned by Dr. Jonathan Crane ("The Scarecrow"), who sprays him with a powerful hallucinogen. Bruce is rescued by Alfred and administered an anti-toxin developed by Fox. Crane later poisons Rachel after showing her that the toxin, which is revealed to only be harmful in vapor form, is being piped into Gotham's water supply. She is saved by Batman. The police enter the asylum, and Batman escapes with Rachel in his Batmobile. After administering the antidote to Rachel in his cave, he gives her two vials of it for Gordon; one for the detective to inoculate himself, and another to mass produce for the city's population.

Later at a party held at his mansion, Bruce is confronted by a group of ninjas from the League of Shawdows and his old mentor Ducard, who then reveals himself to be the real Ra's al Ghul, the former who died being a decoy. Ra's, who had been conspiring with Crane the entire time, plans to destroy Gotham by distributing the toxin (which was extracted from his blue flowers) undetected via Gotham's water supply, and then vaporize it with a microwave emitter stolen from Wayne Enterprises. Bruce, tricking his guests into leaving, fights briefly with Ra's while the League of Shadows set fire to Wayne Manor. Bruce escapes the inferno with Alfred's help just as the manor is destroyed. Batman arrives at the "Narrows" section of Gotham to aid the police, who are engaged in battle with psychotic criminals set free from Arkham Asylum by the League. After saving Rachel, and intimating his identity to her, he leaves Gordon in control of the Batmobile to stop the elevated train that is being used to transport the vaporizer to the city's central water hub. Batman battles Ra's, then escapes just as Gordon topples the elevated line using the Batmobile's missiles, leaving Ra's to crash with the train to the ground. Following the battle, Batman becomes a public hero. Bruce gains control of Wayne Enterprises and installs Fox as CEO, firing Earle. However, he is unable to hold onto Rachel, who cannot reconcile her love for Bruce Wayne with his dual life as Batman. Gordon, newly promoted to lieutenant, unveils a Bat-Signal for Batman and mentions a new criminal that, like Batman, has "a taste for the theatrical", leaving a Joker playing card at his crime scenes. Batman promises to investigate and takes off into the night.

References to the broader Nolanverse

The film was shot in New York and parts of Illinois, Iceland, England. 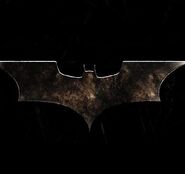 Check out the Batman Begins Gallery Page for more videos!