Batman Beyond: Return of the Joker

Batman Beyond: Return of the Joker is the fourth animated film in the Batman animated film series. The plot revolves around the second Batman facing one of the original Batman's most deadly foes.

In the future Gotham City, the Joker resurfaces. He has taken over a faction of the Jokerz, and on his orders, they steal high-tech communications equipment. One heist happens to coincide with Bruce Wayne's formal announcement of his return to active leadership of Wayne Enterprises, revealing the Joker to the world. Despite Terry McGinnis' intervention, the Joker escapes. Bruce insists that it must be an impostor, as he claims to have witnessed the Joker's death decades before, yet all evidence suggests otherwise. Bruce, unwilling to let Terry face the Joker, impostor or not, demands that he return the Batsuit, to which Terry reluctantly complies.

Later on, Terry is attacked by the Jokerz at a nightclub he is at with his girlfriend, Dana. At the same time, the Joker ambushes and attacks Bruce in the Batcave, leaving him for dead. Terry defeats the Jokerz, and Dana is taken to the hospital for her injuries. Terry rushes to Wayne Manor, and finds Bruce near-dead from Joker venom. Terry quickly administers an antidote, and tends to Bruce with the help of Barbara Gordon.

After insisting on being let in on what really happened to the Joker, Barbara reluctantly tells him that many years back, the Joker and Harley Quinn kidnapped Tim Drake, disfigured him to look like the Joker, and tortured him to the point of insanity. In the process, Tim revealed Batman's secret identity. The Joker then tried to get Tim to kill Batman, but the boy instead turned on the Joker and killed him. Batman and the young Barbara Gordon (then known as Batgirl) buried the Joker's body beneath Arkham Asylum, while Harley fell into a pit and was never found. Following the incident, Tim was rehabilitated, but Bruce forbade him from being Robin again. Barbara retired as Batgirl to become police commissioner and Tim eventually settled down with a wife and family.

Terry decides to question Tim, who denies any involvement and bitterly disavows his past life as Robin. Terry then suspects Jordan Price, who would have taken control of the company were it not for Bruce's return. However, Terry finds the Jokerz on Price's yacht, who reveal that Price had hired them. However, the Joker has sent them to kill Price, as he is no longer needed. Terry rescues Price before a satellite laser destroys the boat, and then turns him into the police.

Back in the Batcave, Terry deduces that Tim must be working with the Joker when he discovers that the high-tech equipment the Jokerz have been stealing can be combined to form a machine that take control of any satellite, thus explaining what happened on the yacht. Bruce is skeptical, but nonetheless sends Terry to question Tim again. Terry tries to confront Tim, but is lured into a trap by the Joker. Escaping in the Batmobile, he is then chased through Gotham by the laser-armed satellite.

Terry tracks the Joker to an abandoned candy factory. After fighting off the Jokerz, he finds Tim, who transforms into the Joker before his eyes. The Joker explains that when he kidnapped Tim all those years ago, he implanted a microchip in the boy that carries the Joker's consciousness and personality, allowing him to physically and mentally transform Tim into a clone of himself. The Joker prepares to fire the satellite again, but before he can, Terry sets Bruce's dog, Ace, on him. Terry knocks the Joker's joy buzzer into the controls, destroying the beam's guidance system, causing it to head to the factory.

The Joker attempts to escape, but Terry seals the factory. Unable to overcome the Joker, who has Tim's extensive combat training, Terry insteads throws the Joker off-guard by using dirty street fighting moves and mocking his obsession with Batman. An enraged Joker throws a handful of grenades at Terry, sending him crashing to the floor. The Joker then pins him to the ground and begins to strangle him. Having retrieved the joy buzzer, Terry shocks the microchip, destroying it and the Joker forever. Tim reverts to his old self, and Terry escapes with him and Ace before the satellite destroys the factory.

In the city jail, two of the female Jokerz, Deidre and Delia Dennis, are bailed out by their grandmother, an elderly Harley Quinn, who laments what disappointments they are. Meanwhile, Terry and Barbara meet Tim in the hospital. Bruce arrives just as Terry leaves, telling him that it is not being Batman that makes him a worthwhile person, but the other way around. Bruce then joins Barbara and Tim in the hospital room.

The film ends with Terry donning the Batsuit and flying off into the heart of Gotham City, now with a greater understanding of his responsibilities as Batman. 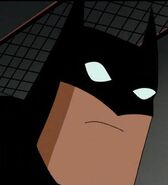 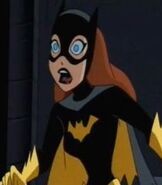