Batman Returns is the 1992 sequel to Batman. Batman protects Gotham City from two new threats The Penguin and Catwoman. A sequel, Batman Forever, was released in 1995.

The story begins 33 years ago at Christmas time in a mansion in Gotham. The wealthy Cobblepots have just given birth to a child - but it is shown that there is something horribly wrong with the child. They soon decide to abandon the child by dropping it into the sewers. As the baby's basket rushes through the sewers, the credits roll, and eventually, the child comes to rest at the feet of a group of Emperor Penguins from the zoo.

Thirty-three years later, it is Christmas time again in Gotham, as the ambitious but ruthless business tycoon Max Shreck gives a speech at a tree lighting ceremony. However, the speech is soon disrupted by a criminal group of clowns known as the "Red Triangle Circus Gang". Although Batman is summoned and is able to restore order, Shreck is kidnapped amidst the chaos and is brought to their leader, a short, deformed man known as "The Penguin". The Penguin informs Shreck of the reason he has taken him: he wishes to return to the society of Gotham, and he wants Shreck to help him achieve this. Shreck is skeptical, but the Penguin blackmails him with incriminating evidence of his more dubious business practices.

Shreck arranges for the Penguin to "rescue" the mayor's infant child from his own gang members. The plan works, and Penguin becomes a hero to all. Even Bruce is convinced. The Penguin asks to be allowed to find his parents and is given private access to the Gotham's Hall of Records, where he is seen jotting down an apparently unrelated list of names. He discovers his parents were a wealthy aristocratic couple. Adopting his birth name of Oswald Cobblepot, he publicly forgives his now-dead parents, winning more hearts and minds. Shreck decides to use Oswald's fame to his own advantage, persuading him to run for mayor to remove the final obstacle to building a new power plant. Cobblepot reluctantly agrees, noting he still has his own plans to carry out.

During this time, Shreck attempted to murder his timid secretary Selina Kyle when she discovered his "power plant" was in fact a giant capacitor to suck power from the city. She survived her subsequent defenestration at Shreck's hands after her body was circled by a large number of cats, and came back with a more assertive, unstable personality, ostensibly with a cat's nine lives (minus her first "death"). Kyle makes a homemade black vinyl catsuit and becomes a costumed vigilante under the name "Catwoman". During Penguin's efforts to cause chaos through his gang to create dissatisfaction with the current Mayor, Catwoman bombs Shreck's department store. She subsequently fights Batman, who had been neutralizing the Red Triangle Circus earlier, and is apparently killed again in the process when she falls off a roof.

A plan is forming

While Selina Kyle is pursued in a romantic relationship with Bruce Wayne, as Catwoman she allies herself with the Penguin to get back at Batman for his killing her, although the two are still unaware of the other's alter-egos. When the subsequent plan is put into action, Batman is framed for kidnapping and murder and finds himself trapped in the Batmobile under Penguin's control. He barely survives, but Cobblepot has become more popular than ever. Although their plan was a success, Catwoman and Penguin's alliance falls apart when she rebuffs a sexual advance from him, and Penguin opts to kill Catwoman himself. However, his campaign to recall the current mayor is quickly destroyed when Bruce Wayne plays selected comments he stated while controlling the Batmobile. He was recorded insulting the people of Gotham, and this audio is played over the sound system at a rally. Penguin flees into the sewers, renounces his humanity, and reveals his secret plan: kidnap and kill the firstborn sons of Gotham's most prominent as revenge against what was done to him.

Before this scheme is launched, Bruce Wayne meets Selina Kyle at a dance hosted by Shreck, where she reveals to him her intentions to kill Shreck. The two subsequently discover the other's secret identity, but before they can leave to discuss this development, Penguin storms the hall and tries to take Max's son Chip. Max persuades Penguin to take him instead, and Bruce and Selina depart. Bruce, as Batman, attacks Penguin's Red Triangle Circus goons and puts a stop to the kidnappings. However, Penguin has a backup plan: an army of rocket-armed penguins dispatched to bomb Gotham. But Batman manages to jam their control signals and turn the birds around so that they attack the base instead, leaving the Penguin critically injured.

Batman glides through a broken window and discovers Catwoman has come to kill Shreck, which he unsuccessfully attempts to talk her out of. During this, Shreck draws a gun he took in the confusion and attempts to kill them both. Batman is shot once while Catwoman is hit four times, apparently leaving her with two "lives". She decides to sacrifice her next-to-last life by putting a taser in her mouth and "kissing" Shreck, while also grabbing hold of a large electric generator and pushing Shreck into it, causing a huge explosion. When the smoke clears, Batman searches the rubble for Selina, but all he finds is Shreck's smoldering corpse. Penguin, barely alive, emerges from the slimy water and grabs for his gun umbrella to kill Batman but picks up his "cute" one by mistake. He finally falls dead on the floor and is slid gently into the water by the penguins as a final tribute.

Driving through Gotham, Bruce sees Catwoman’s shadow. Investigating, he only finds Selina's pet cat, which he decides to take home. As the bat-signal lights up in the sky, the figure of Catwoman appears looking at the signal from a rooftop.

The film was shot in parts of California. 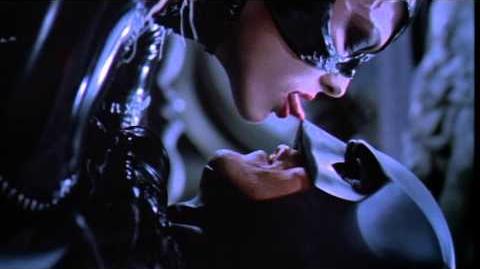 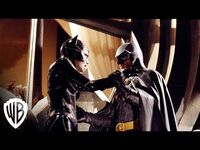 Batman Returns - Shadows of the Bat- Dark Side of the Knight - Warner Bros. Entertainment