Start a Wiki
watch 03:32
Batman v Superman: Dawn of Justice - Official Trailer
Do you like this video?

Batman v Superman: Dawn of Justice is the follow-up to Man of Steel and the second film in the DC Extended Universe that sees the team up between Superman and Batman.

Eighteen months after the destructive battle in Metropolis (Man of Steel), Superman has become a controversial figure. Billionaire Bruce Wayne, who has covertly operated in Gotham City as vigilante Batman for nearly two decades, blames Superman for the casualties that resulted from his fight with General Zod. Superman, in his public identity as Daily Planet journalist Clark Kent, sees Batman as dangerous and seeks to expose him. LexCorp's mogul Lex Luthor also sees Superman as a threat and convinces Senator June Finch to help him recover kryptonite from Zod's failed terraforming attempt from the Indian Ocean. Finch later blocks Luthor's efforts to use Zod's DNA and the Kryptonian scout ship recovered from the battle to create a biological weapon.

Wayne successfully infiltrates a faux fundraiser promoted by Luthor to retrieve data from LexCorp's mainframe, but his data drive is stolen by mysterious antiques dealer Diana Prince, who learns that Luthor has a file on her. Wayne later receives the data drive back from her after she copies it. While decrypting the drive, he receives a vision of a dystopian future, where he leads a force of rebels against Superman. Wayne is snapped out of the vision by a mysterious time traveler, who warns him that Lois Lane has a crucial role to an impending threat, and that he must quickly find "the others". He later learns not only of Lex's experiments with kryptonite, but also his ongoing investigation about metahumans including Prince herself, who is an immortal warrior. Batman attempts to retrieve Luthor's kryptonite, but is intercepted by Superman, who orders him to cease his activities. Later, Finch summons Superman to a Congressional hearing at the U.S. Capitol to debate the validity of his actions, where Luthor masterminds a bombing that kills dozens of people, including Finch and Luthor's assistant, Mercy Graves. The public blames the bombing on Superman, who goes into self-imposed exile.

Batman retrieves the kryptonite and prepares to launch a pre-emptive strike against Superman; building a powerful exoskeleton armed with a kryptonite-powered riot gun and spear. With Batman now having the kryptonite, Luthor activates the Genesis Chamber aboard the scout ship and splices his own DNA and Zod's. Luthor endangers Lois to lure Superman to LexCorp Tower, where he reveals that he has been aware of Superman's secrets for some time. Luthor blackmails Superman into confronting Batman by holding his adoptive mother Martha Kent hostage, anticipating that one of the heroes would die during their altercation. Superman tries to reason with Batman, revealing that he knows his secrets, but this leads to a brutal fight in which Batman wins using the kryptonite riot gun. Before Batman can kill Superman with the kryptonite spear, Superman pleads for Batman to "save Martha", which was also the latter's late mother's name, causing him to shout in rage. Lois arrives and explains the situation, causing Batman to come to his senses and realize Superman is not a threat. Upon learning of Luthor's plan, Batman leaves to rescue Martha, while aboard the crashed ship, Superman confronts Luthor, who unleashes a monstrous genetically-engineered creature made with Kryptonian technology, whom he warns the heroes will bring about their "Doomsday". Superman and Batman join forces to fight the monster and are aided by an arriving Prince, but are outmatched due to the creature's ability to absorb and redirect energy. Realizing that their shared Kryptonian DNA results in shared vulnerabilities, Superman retrieves the kryptonite spear and impales the creature with it, while the creature stabs Superman with his bone protrusions, fatefully killing him.

Luthor is arrested after Lane exposes his numerous crimes; when he is visited by Batman in prison, he gloats that Superman's death has made the world vulnerable to powerful threats, which he became privy to while manipulating the Kryptonian ship's technology. Batman threatens Luthor, and promises that he will always be watching him. A memorial is held for Superman in Metropolis. Clark is also declared dead and Wayne, Lane, Martha, and Prince attend a private funeral for him in Smallville. Martha passes an envelope to Lane, which contains an engagement ring from Clark. After the funeral, Wayne reveals to Prince that he plans to form a team from Luthor's file subjects to protect the world in Superman's absence. Later, a faint heartbeat begins echoing from Clark's grave and the dirt around it begins to levitate. 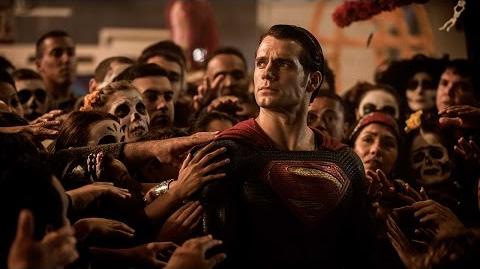 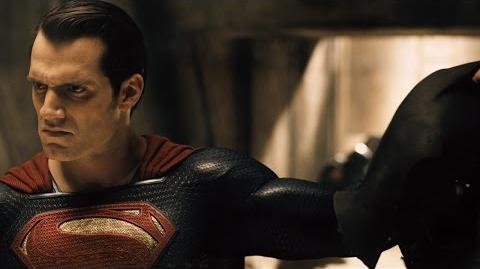 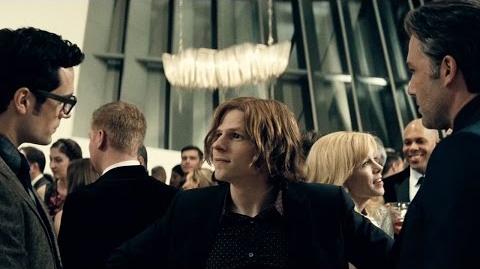 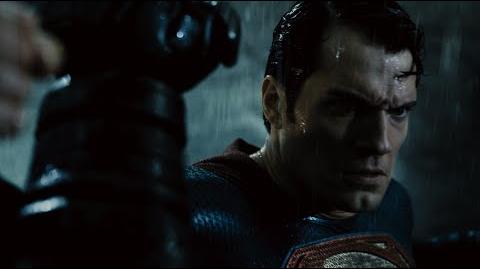 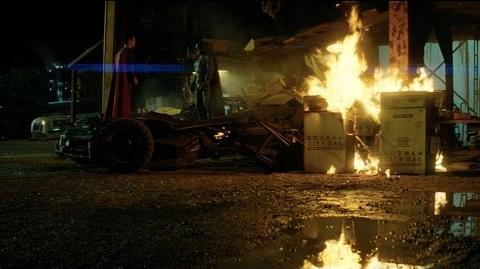 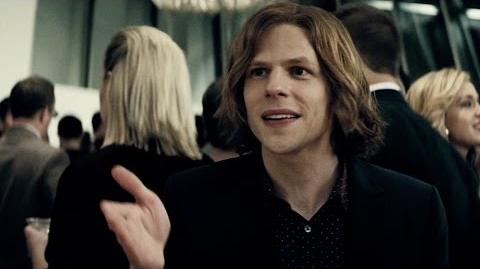 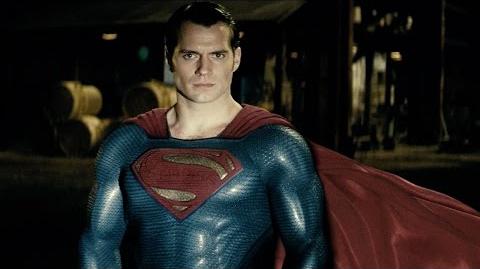 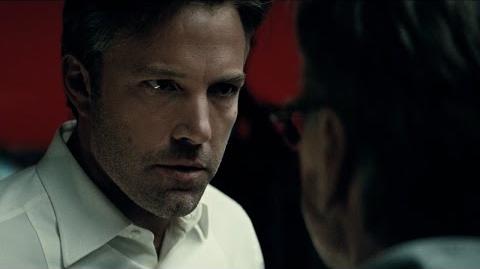 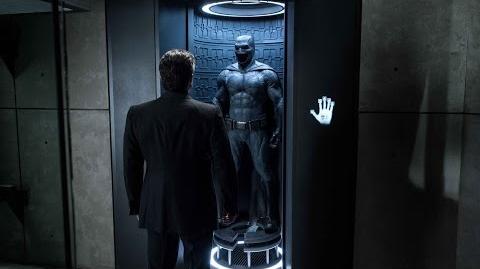 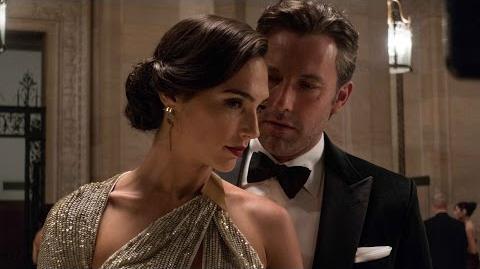 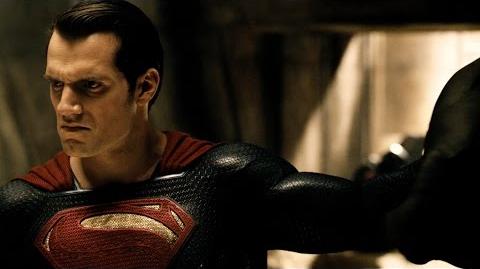 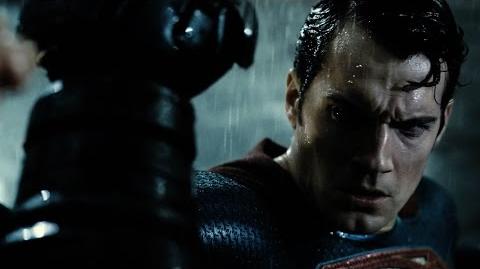 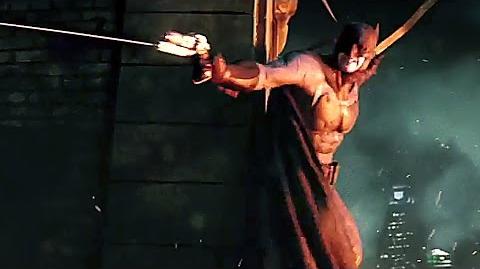 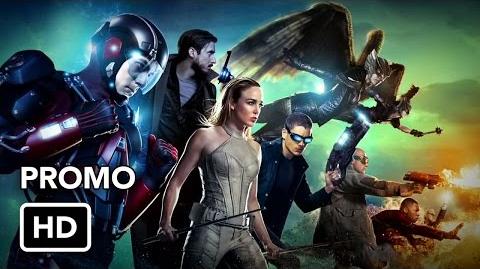 DC's Legends of Tomorrow Their Time Is Now Promo (HD) 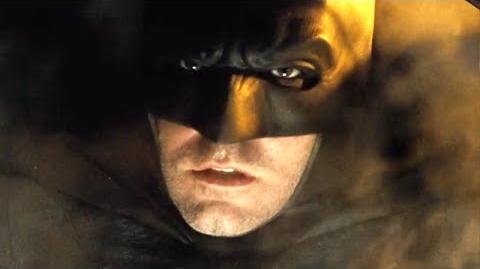 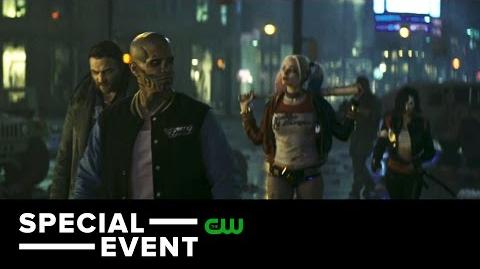 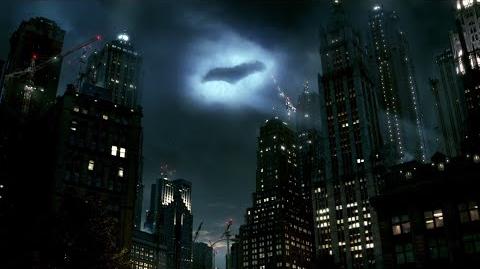 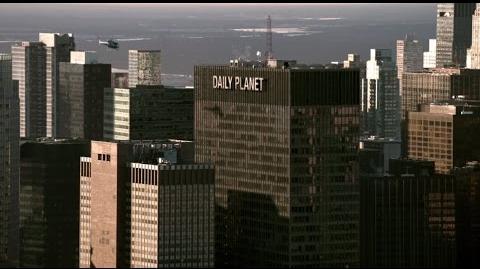 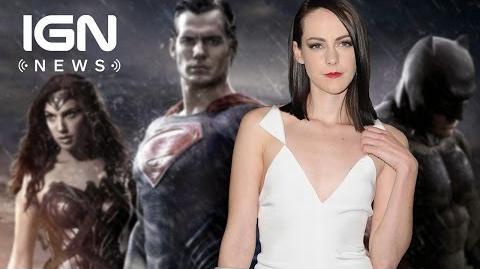 Retrieved from "https://dcmovies.fandom.com/wiki/Batman_v_Superman:_Dawn_of_Justice?oldid=116869"
Community content is available under CC-BY-SA unless otherwise noted.