Batman vs. Robin is the fourteenth animated Batman and the fifth feature length film in the DC Animated Film Universe that's partially based on the Batman: The Court of Owls storyline which features the Court of Owls.

During an investigation of missing children, Damian Wayne, still fighting crime as Robin, has taken the Batmobile out to an abandoned toy factory without Batman's consent, where he finds Anton Schott, who is responsible for the children's disappearance and has also transformed some of them into grotesque, mutilated "Dolls". Damian's father, Bruce, arrives as Batman to aid Damian in the resulting battle, with Damian chasing after the Schott while Batman knocks out the Dolls with gas and frees the remaining children. Damian chooses to spare Schott, only for an owl-masked assassin to kill him, telling Damian to never doubt his instincts. The assassin leaves Damian and the Schott's body behind, leading Batman to accuse Damian of murdering him when he arrives. Damian insists he spared Schott out of respect for Batman, and after inspecting the body further, Batman discovers an owl feather.

The next night, Bruce has dinner at Wayne Manor with Samantha Vanaver, a wealthy woman whose family, like the Waynes, have had positions of influence in Gotham for hundreds of years. After dinner, Bruce shows Samantha his plans to make Gotham City a better place. Samantha then meets Damian, and after she leaves, Bruce tries to connect with Damian by watching a movie with him. However, Damian later tries to sneak out of the mansion, but is thwarted by Bruce's security systems. Damian voices his frustration of being "kept prisoner" as both Damian and Robin, saying that Bruce never trusts him. Bruce tells Damian he needs to earn his trust, with Damian telling him it should work both ways. Bruce goes out as Batman, leaving Damian with Dick Grayson to look after him, as he investigates the owl feather he found, leading him to the Gotham Museum of Natural History's Hall of Owls. Bruce is reminded of a story his father, Thomas, told him when he was a child; a story about the Court of Owls, a secret society of rich men who ruled Gotham from the shadows and killed any who opposed them by sending agents called "talons". Although Thomas insisted it was just a story, the night Thomas and Bruce's mother Martha were murdered, Bruce saw an owl clutching a bat flying away from the scene of his parents' murder, and became convinced the story was true and that the Court of Owls was to blame. Bruce swears vengeance, and takes his frustrations out by killing an owl nesting in the attic of Wayne Manor, but after finding no evidence of the Court of Owls from his search of a high society club, Bruce conceded and dismissed the legend.

In the present, Batman is attacked by three owl-masked assailants, all seemingly inhuman and impervious to harm. Although he manages to destroy one with explosives, the other two nearly kill Batman before they suddenly liquefy into black ooze, and Batman sends out a distress beacon to the Batcave before losing consciousness. Damian, having escaped Grayson and the mansion, stops a mugging and is again approached by the assassin he met, who introduces himself as Talon. Talon encourages Damian's choice of punishing criminals, and offers Damian a chance to join him. Damian is unsure of this decision, and returns home where Bruce is waiting, disappointed that Damian sneaked out again. Bruce warns Damian that he will be sent away to a school in Switzerland unless he learns to discipline himself. However, the next night, Damian sneaks out again.

On the way to a date with Samantha, Bruce is attacked by white owl-masked people and brought before the Court of Owls, who offer Bruce a chance to join them as a member of one of Gotham's wealthiest families. After Bruce leaves, given time to consider the offer, it is revealed that Talon is working for the Court of Owls, who are secretly raising an army of the inhuman warriors, also known as "talons", through a process similar to the Lazarus Pit, so that they can destroy Gotham City and allow the Court to rebuild it as they see fit. Unfortunately, the serum they have developed to awaken the talons only lets them last for 24 hours at a time outside of their storage tanks before they rot and dissolve. Also, the talons will become brittle and become vulnerable to being shattered if they are exposed to extreme cold. Talon will soon be forced by the Court to undergo the process himself and become one of these monsters and the general of this army, but not before bringing Damian over as his apprentice and replacement.

Damian, having contacted Talon, has gone out on missions with him to take out some criminals. Damian has constantly hesitated to kill due to Batman's code, which frustrates Talon. Sensing how Damian looks up to Batman as a father, Talon tells his story about how he and his own father were thieves; Talon looked up to his father and wanted to be just like him, but could not, and was always punished for it. One night, Talon gave his father up to the police, who shot him, and afterwards, Talon was recruited by the Court of Owls. Batman shows up, having tracked Damian's activity, but is blocked by Damian from capturing Talon. Batman tries to convince Damian that Talon and the Court of Owls are using Damian to get to him, but Damian believes Batman is selfish, trying to hold him back from his potential. A confrontation breaks out between father and son, with Damian almost killing Batman before leaving.

Talon is revealed to be in a relationship with Samantha, who is secretly the Grandmaster of the Court of Owls. Despite their social class divide, Samantha wants to spare Talon from the ritual and have him stand by her side, as they plan to destroy Batman with Robin. Batman sneaks into the Court of Owls through the sewers which has been flooded with a psychotropic gas by the Court, causing Batman to hallucinate the night his parents were murdered when he finally reaches their headquarters. There, he sees the shooter is revealed to be not Joe Chill, but a grown up Damian as Batman. Bruce realizes as Batman will cause Damian the same rage and hatred as the Court of Owls and has the potential to turn him into a villain that will bring destruction on the world. He asks the grown up Damian for forgiveness, who reverts to the child Damian.

Bruce awakens from his hallucination, finding himself back at the Batcave with Alfred Pennyworth and Grayson. Meanwhile, Talon introduces Damian to the Court of Owls, but when Damian reveals himself to the Grandmaster, Samantha realizes that if Robin is Bruce's son, then Bruce must be Batman. Ordering Talon to kill Damian, Talon instead turns against the Court of Owls, murdering every member, including Samantha. Now in control of the Court's army of resurrected talons, Talon leaves Damian behind at the Court, offering him another chance to join him once he has killed Batman.

Talon and his undead soldiers attack the mansion, breaking into the Batcave as Batman, Grayson, and Alfred fight them off. Batman utilities a mechanized battle armor in the fight, while Nightwing is wounded and crippled by the talons attacks. Alfred activates a coolant system that freezes all the talons in the cave solid. Batman and Talon ultimately face off, with Talon gaining the upper hand and wounding Batman, before Damian, who escaped from the Court, enters and fights Talon to protect Batman. Damian eventually defeats Talon, holding a sai to his throat. After telling Damian one last time never to doubt his instincts, Talon commits suicide by forcing Damian's sai through his neck, leaving Damian stunned and confused.

Bruce tries to welcome Damian back home, but Damian refuses, claiming he needs to sort out who he is. Damian leaves for a monastery in the Himalayas that Bruce told him of when he was leaving. 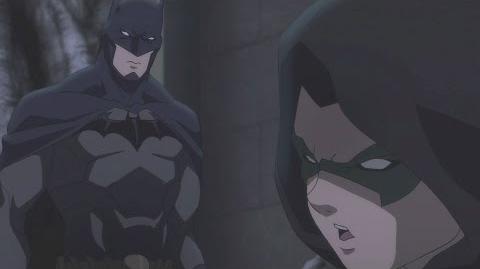 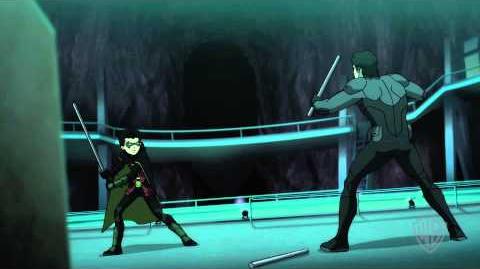