Batman and Robin are invited to a top-secret demonstration hosted by Professor Hugo Strange and his assistant Dr. Harleen Quinzel, that may eventually change the future of Gotham forever. Along the way, Batman takes a stop at Gotham State Penitentiary to visit Catwoman (whose suicide attempt from the first movie somehow failed) to give her a book on poetry by Elizabeth Barret Browning; something to keep her occupied for the next 36 months of her life until she is let out of prison for good. At the laboratory, they meet district attorney and Bruce Wayne's ally in the war against crime, Harvey Dent, who is famous for having stopped a coin counterfeit, keeping a two faced quarter as a souvenir from the case.

Hugo Strange believes that good are evil are all but one-sided and has created an "Evil Extractor" to which the volunteering criminals, Joker, Penguin, Riddler, Egghead and Mr. Freeze, will be purified of their corruption. Batman bluffs it off, saying that there are no easy fixes to the straight and narrow path, but Strange conducts his experiment anyway, despite the fact that it will make the jobs of Batman, Robin and Harvey obsolete. All goes well until the Joker entices his compadres to overload the machine. Noticing this, Professor Strange orders Dr. Quinzel to shut it down...but is too late, and Harvey (as opposed to acid from the comic book mythos) is horribly scarred by the explosion of the containment vat, with Batman being successful in saving the right side of his face.

Harvey, now re-christened Two Face, goes on a crime spree as seen in the opening credits, all of which his attempts are foiled by the Dynamic Duo. He is eventually whisked to a hospital where his face has been given reconstructive surgery. His sanity has apparently been restored as well. Now returning to his old job (as the assistant to the assistant district attorney), Harvey spends the next six months in charge of his own fate, but at the same time, King Tut and his henchmen have been robbing an biplane while at Wayne Manor, Aunt Harriet is getting ready for a soiree in Bruce and Dick's place while they investigate the crime as Batman and Robin.

After implying comparisons between King Tut and Two Face, Batman and Robin return to the Batcave where they realize that a double decker bus company are planning to hold the millionaires, including Alfred and Aunt Harriet, hostage. They arrive on the bus via Batmobile and fight Tut and the Tutlings while Alfred escorts the patrons to safety. Unfortunately, the Dynamic Duo are subdued by a pair of twin snakes with knockout venom.

In an urn trap as seen in King Tut's debut episode, Batman and Robin are to be entombed in the foundations of the Pyramid Towers that are soon to be erected above the digging spot where they are trapped. Cement pours over them and when it appears as though they are doomed, they press the back of their soles against the sides of the jars, triggering the Batjets. They fly to confront King Tut in one final battle and a brick restores his memory. As they take him away, a pair of twins seize the jewels that were stolen by the Tutlings.

Batman, Robin, Commissioner Gordon and Chief O'Hara interrogate King Tut as Harvey waits in the shadows, with O'Hara constantly hitting Tut on the head with his baton. Lucille Diamond, the king's defendant, intervenes and ushers them out of the room so that she can speak to him. At Tut's trial, she implicates that the concussion is nothing more than a threat to a mild-mannered man. Chief O'Hara tearfully confesses to hitting Tut and Harvey calls Batman as his next witness, but Professor Mackel Roy himself admits his guilt, ready to suffer the minimum penalty of being rehabilitated in prison. After the sentencing, Harvey shares a highball with Bruce Wayne, much to Dick's annoyance at bearing the hardships of a third wheel.

Harvey is then due to a attend a charity for underprivileged twins at the Winning Pair casino just as Bruce and Dick resume their identities as Batman and Robin once more. A package has arrived at Commissioner Gordon's office, a World Atlas book marked for Batman...with it's pages eaten away in three holes. Robin surmises the culprit to be Bookworm and the duo race off in the Batmobile to find him at the Gotham City Library where a fight ensues and the three priceless books that Bookworm had his eyes on have disappeared.

Batman and Robin deduce that the stolen books were all about duality, but Two Face has already been reformed and try to find another way behind it. Regardless, they head to an abandoned sign factory with Two Face and the twins waiting for them. After defeating the twins, Two Face pins them with a large number two and the flip of his coin landing on the right side spares their lives. Once they have left, Batman believes that Harvey has made a lot of enemies in his career and they are all out to destroy it. Harvey, meanwhile is having some problems of his own after he makes a phone call to... Two Face, who kidnaps Professor Strange as part of their scheme.

Robin is punished to his room by Batman after nearly getting into a row about Harvey’s involvement in Two Face’s plans and Catwoman, who by now has been stood up, escapes the pen by switching places with Lucile Diamond. Following Harvey to the laboratory, Robin is ambushed by Two Face and Professor Strange corrupts him with the same gas of the extractor that mutates the left side of his body. Batman is forced to fight his beloved sidekick and cures him back at the Batcave, following Two Face to the casino where he is in fact revealed to be Dent, having suppressed his bad side (á la Dr Jekyll and Mr. Hyde). Once the Dynamic Duo are strapped to a large silver dollar, he unmasks Batman and deduces Robin’s true identity, then Two Face invites the Joker, Penguin, Riddler, Mr. Freeze, Egghead, Shame, Clock King and Catwoman to an auction for the highest bidder of Batman’s true identity.

With Catwoman’s help, Batman and Robin defeat the villains, but Two Face gets away on the biplane stolen by King Tut, intending to use the evil gas to remake Gotham City in his image. The Dynamic Duo manage to shoot him down towards a flaming factory where Batman goes one on one with Two Face having completely taking over Harvey’s body. In a battle of wits, Batman urges Harvey to regain self control and he does, defeating Two Face for good as they escape the factory.

The next morning, Batman and Robin use the Batwing to cure the infected Gothamites and return that night to Wayne Manor where Harvey holds an auction for a bachelor party. Batman appears before everyone, and to his delight, ends up having the first person to bid for him being none other than Catwoman. 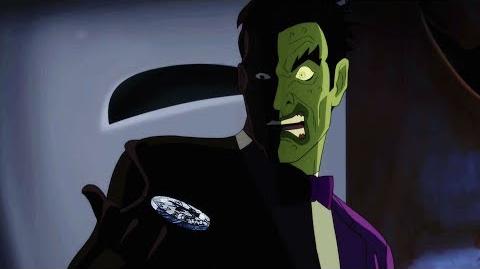