Black Adam is an upcoming film that will serve as a spin-off to Shazam! and is the eleventh film in the DC Extended Universe which follows Teth-Adam, who uses the power of Shazam for his own ways in the modern world.

“Nearly 5,000 years after he was bestowed with the almighty powers of the Egyptian gods—and imprisoned just as quickly—Black Adam is freed from his earthly tomb, ready to unleash his unique form of justice on the modern world.”

The World Needed a Hero, It Got Black Adam.

It was announced in January 2017 that Dwayne Johnson will be reprising his role as Black Adam in his own solo movie.[1]

In October 2019, Dwayne Johnson revealed that production for the Black Adam project will start in July of 2020. 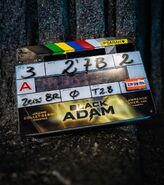