"Twenty years in Gotham...we've seen what promises are worth. How many good guys are left? How many stayed that way?"
―Batman[src]

Bruce Wayne is a billionaire playboy from Gotham City and the owner of Wayne Enterprises. He became Batman after the death of his parents and years of training to fight.

In 1981, Bruce Wayne left the theater with his parents Thomas and Martha when they were held up at gun point by Joe Chill who shot both Thomas and Martha, killing them both. At their funeral, an overwhelmed Bruce fled from the service and fell down a hole finding hundreds of bats living in a cave beneath Wayne Manor's grounds.

When Superman and General Zod's battle left the atmosphere, Zod smashed through a Wayne Enterprises satellite. Later in the battle, Superman flies past a poster which has "Keep Calm and Call Batman" written on it.

"Tell me, do you bleed? You will."
―Batman to Superman[src]

Having been present in Metropolis during Superman's clash with Zod, Bruce Wayne raced through the falling buildings and debris, hurrying to Wayne Tower to evacuate the building. Upon arriving down the street Bruce along with dozens of other bystanders witness Superman and Zod crash into Wayne Tower, which is then ripped apart by Zod's heat vision.

Horrified, Bruce runs into the falling debris, trying to save as many people as he can. While being successful at saving a few, Bruce arrived at the destroyed Wayne Tower in Metropolis and saves a young girl from being crushed by falling rubble. She reveals her mother was inside Wayne Tower when it fell and was killed during the fight between Superman and Zod. Bruce comforted the young girl while looking into the sky to see Superman push Zod through yet another skyscraper, bringing it to the ground. Enraged at his apparent lack of care for innocent bystanders or no empathy for the people killed because of their fight, Bruce then dedicated himself to taking down Superman, deeming him too dangerous and too powerful to play a hero.

Eighteen months later, Batman ambushed a human trafficker in Gotham and branded him. Clark Kent, now working at the Daily Planet was investigating Batman and wanted to run a piece about how Batman was not a hero, but a criminal, sighting his branding is equaling to a death sentence as people in jail with the Bat Brand are always killed. Perry White dismissed the article stating that no one wanted to see Clark Kent taking on the Batman. Following day, Bruce and Clark met at the charity party, hosted by Lex Luthor where the two discussed about what kind of hero the world truly needs. The real reason why Bruce visited the party was to install the device which would hack into Luthor's database to acquire access to Luthor's info believing Luthor to be seeking some kind of weapon of mass destruction. After successfully doing it, accessing the database after it was borrowed by Diana Prince, Bruce had an apocalyptic dream where Superman ruled the Earth while the world was being attacked by a unknown alien force (Darkseid), afterwards he was visited by the Speedster from the future who warned him of how dangerous Superman is. Following day, while he was trying to steal the Krypronite from Lex Luthor's truck, Superman ambushed Batman. Unable to avoid him, Batman sped right into the Man of Steel, who didn't even flinch as the car struck him. The Batmobile, on the other hand, careened out of control and crashed into a nearby gas station. Superman tore the roof off the Batmobile and confronted the Caped Crusader, telling him the Bat was dead, and not to go to the Bat-Signal if he saw it again.

Further fueled by fury and resentment towards the Man of Steel, Batman set his plan into motion; he built a powerful exo-frame, a Kryptonite riot gun and a Kryptonite spear to combat Superman.

Batman activated the Bat-signal, knowing Superman would show up to stop him. When Superman attempted to inform Batman that he needed his help, Batman refused to listen and unleashed a couple of Sonic Waves from emitters he had hidden around the area. Destroying them, Superman instead shoved Batman through a building and tried to subdue Batman so he could explain.

During a struggling battle, Batman has managed to hit Superman several times with his Kryptonite rounds, which decreased Superman's powers sufficiently enough for Batman to fight him toe-to-toe. After a violent struggle, the Dark Knight successfully defeated the Man of Steel. Batman prepared to deliver the fatal blow with the Kryptonite spear, when Superman beseeched Batman to save his mother, Martha, who had been kidnapped by Lex Luthor. Batman remembered his own Martha, and realized that the whole confrontation had been a set up by Luthor.

Batman helped Superman up and promised him that Martha would not die tonight before heading off to rescue her from Luthor. Batman arrived at the warehouse that Martha was being held in and engaged it with the Batwing before taking down everyone inside and saving Martha.

Batman rejoined Superman who was confronting Lex and attempting to take him in. However, Lex revealed that he had a backup and showed Superman a genetic splice of the Zod's corpse and Lex's own DNA which he unleashed. After Superman takes the battle to space and restrains the monster so the US could hit it with a nuke that Superman seen coming. The Nuke only made Doomsday stronger and nearly killed Superman who appears to be floating lifelessly in space. Doomsday mutates growing numerous bone spikes and attacks the Batwing. Batman, realizing it is Kryptonian points out that the spear can kill it and remembers he left it back at the docks where he fought Superman. Engaging Doomsday with the Batwing, Batman lures Doomsday back to the now mostly abandoned docks Doomsday fires a heat beam at the Batwing causing it to crash and fires another one at Batman but Wonder Woman arrived to deflect the blast with her gauntlets.

Batman, Superman and Wonder Woman fought Doomsday. Batman initially has to take cover during the opening moment of the fight due to Doomsday unleashing a massive energy blast and after the blast subsided waited and bides his time to strike. Superman suddenly flies off to get the spear and Wonder Woman is briefly incapacitated so Batman is forced to engage the monster on his own to keep him away from going any further inland, only able to provide distractions for Doomsday so Wonder Woman can attack and buy time for Superman. After a long battle, Wonder Woman traps Doomsday with her Lasso and Batman fires his final Kryptonite round, effectively shutting off Doomsday's powers opening the way for Superman to deal the final blow.

However, the Kryptonite round wasn't able to incapacitate Doomsday for long and he was able to impale Superman through the heart with one of his bone spikes, killing him.

After the battle, Batman visited Lex Luthor in his cell, enraged at Luthor being responsible for Superman's death and ready to brand him with the Bat-Brand. Luthor reveals he knows who Batman is, but quickly changes his demeanor telling Batman that he was deemed mentally unfit to stand trial. Batman says he is aware and tells Luthor that he has arranged for him to be transferred to Arkham Asylum, telling Luthor he has a lot of friends there who can keep an eye on him and want to meet him. Horrified at Batman punching a hole in the wall next to him with the Bat-Brand and vanishes, Luthor screams that he is coming.

At Clark Kent's funeral in Smallville, Bruce talks to Diana about rallying other like her with abilities because he had a feeling they would need it and is revealed to have paid for the entire funeral as a anonymous payer.

"You should shut it down or my friends and I will do it for you."
―Bruce Wayne to Amanda Waller[src]

Amanda Waller explained to several members of US intelligence that Batman was responsible for the apprehending the likes of Harley Quinn, Killer Croc and Deadshot who were residing within Belle Reve Penitentiary.

After the destructive fallout in Midway City, Amanda met with Bruce Wayne. Bruce asked her for the information files on the meta humans Arthur Curry and Barry Allen, in return he'd protect her. She then disclosed the fact that Wayne should "stop working nights", acknowledging that she knew he was Batman, Bruce responded in kind with a warning to shut down her Squad, before he does.

Bruce sent a Wayne Enterprises case to The Louvre in Paris to Diana Prince. Inside the case was an original photograph of Steve Trevor and the group Diana was with in War World I. Bruce left a note saying "one day, she'll tell him her story." Diana sent an e-mail to Bruce thanking him for the photograph.

"I'm building an alliance to defend us."
―Bruce Wayne[src]

Bruce possesses a serious, tough, calculating and tactical persona and is known to be highly dedicated and determined as a crime-fighter. He is brave, bold, and completely willing to risk his own life for the sake of others. Despite being described as caring and selfless, he is driven by ruthlessness and cruelty to deal with his enemies, causing his inner demons to sometimes overwhelm his better judgement. 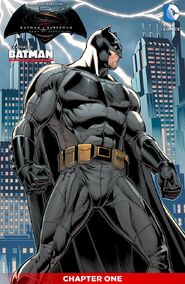 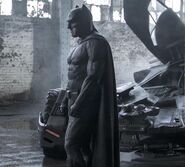 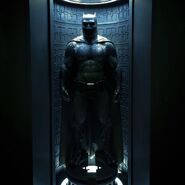 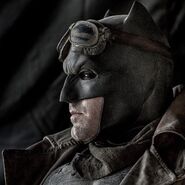 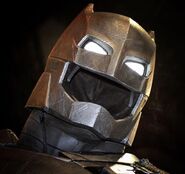 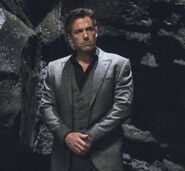 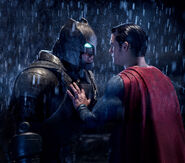 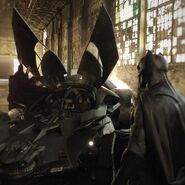 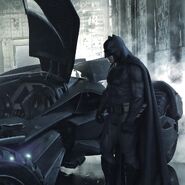 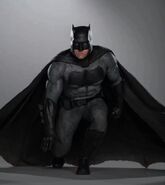 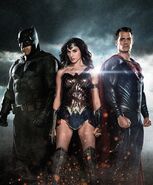 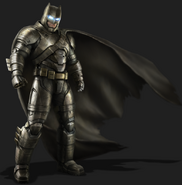 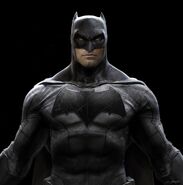 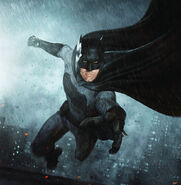 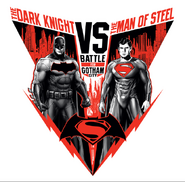 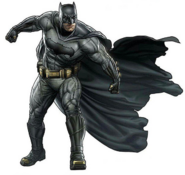 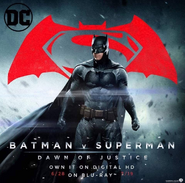 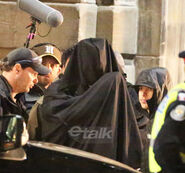 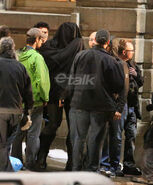 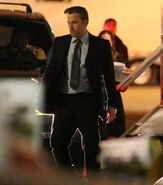 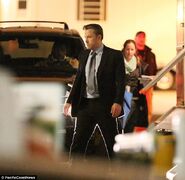 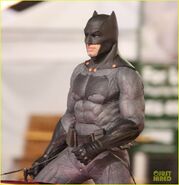 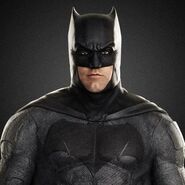 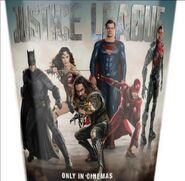 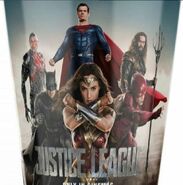