Start a Wiki
Darkseid is the ruler of Apokolips and an extremely deadly adversary of Superman, and Batman to a lesser extent. He is also interested in Kara Zor-El, Supergirl, as a protege.

When it comes to his attention that Supergirl could be a powerful ally under his control. On Earth, he summons thousands of Doomsday clones, but kidnaps her while they are distracted. The duo decide to go to Apokolips and managed to get him into a bargain where he won't make a move against her. When the cousins arrive in Smallville, Darkseid uses his omega beams to torture him, but Kara takes the blast, knocking her out. Enraged, Superman tries to defeat Darkseid but is easily overpowered and nearly killed by one casual punch that sends him to the sun. Supergirl is easily overpowered as well, they finally manage to distract him and send him to a part of space where he is frozen.

Darkseid is considered a god among gods and is easily the strongest individual across the span of the multiverse. As a being beyond comprehension, he can essentially act outside the laws of space and time. The full extent of hours power is unknown, but he could effortlessly capable of killing even Superman, In fact, Darkseid is virtually superior to Superman in every way, including strength, speed, intelligence, power, will, etc. 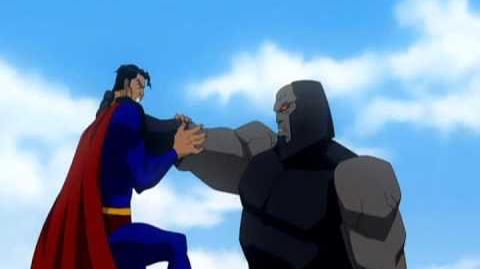 Retrieved from "https://dcmovies.fandom.com/wiki/Darkseid_(Superman/Batman)?oldid=116876"
Community content is available under CC-BY-SA unless otherwise noted.