Joker is a 2019 film that serves as an origin story of The Joker.

In 1981, party clown and aspiring stand-up comedian Arthur Fleck lives with his mother, Penny, in Gotham City. Gotham is rife with crime and unemployment, leaving segments of the population disenfranchised and impoverished. Arthur suffers from a medical disorder that causes him to laugh at inappropriate times; he depends on social services for medication. After a gang of delinquents attacks Arthur in an alley, his co-worker, Randall, gives him a gun for protection. Arthur meets his neighbor, single mother Sophie Dumond, and invites her to his upcoming stand-up routine at a nightclub.

While entertaining at a children's hospital, Arthur's gun falls out of his pocket. Randall lies to management that Arthur bought the gun himself and Arthur is fired. On the subway, still in his clown makeup, Arthur is beaten by three drunken Wayne Enterprises businessmen; he shoots two in self-defense and executes the third. The murders are condemned by billionaire mayoral candidate Thomas Wayne, who calls those envious of more successful people "clowns." Demonstrations against Gotham's rich begin, with protesters donning clown masks in Arthur's image. Funding cuts shutter the social service program, leaving Arthur without his medication.

Sophie attends Arthur's stand-up routine, which goes poorly; he laughs uncontrollably and has difficulty delivering his jokes. Popular talk show host Murray Franklin mocks Arthur by showing clips from the comedy routine on his show. Arthur intercepts a letter written by Penny to Thomas, alleging that he is Thomas's illegitimate son, and berates his mother for hiding the truth. Arthur goes to Wayne Manor, where he meets Thomas's young son Bruce, but flees after a scuffle with the family butler Alfred Pennyworth. Following a visit from two Gotham City Police Department detectives investigating Arthur's involvement in the train murders, Penny suffers a stroke and is hospitalized.

At a public event, Arthur confronts Thomas, who tells him that Penny is delusional and not his biological mother. In denial, Arthur visits Arkham State Hospital and steals Penny's case file; the file says Penny adopted Arthur as a baby and allowed her abusive boyfriend to harm them both. However, Penny says that Thomas used his influence to fabricate the adoption and commit her to the asylum to hide their affair. Distraught, Arthur returns home and enters Sophie's apartment unannounced. Frightened, Sophie tells him to leave; their previous encounters were Arthur's delusions. The following day, Arthur kills Penny at the hospital.

Arthur is invited to appear on Murray's show due to the unexpected popularity of his comedy routine's clips. As he prepares, Arthur is visited by Randall and fellow ex-colleague Gary. Arthur murders Randall but leaves Gary unharmed as he treated him well in the past. En route to the studio, Arthur is pursued by the two detectives onto a train filled with some of the clown protesters. One detective accidentally shoots a protester and incites a riot, allowing Arthur to escape.

Before the show goes live, Arthur requests that Murray introduce him as Joker, a reference to Murray's previous mockery. Arthur walks out to applause, but starts telling morbid jokes, confesses to the train murders, and rants about how society abandons the downtrodden and mentally ill. Arthur kills Murray and is arrested as riots break out across Gotham. One rioter corners the Wayne family in an alley and murders Thomas and his wife, Martha, sparing Bruce.[a] Rioters in an ambulance crash into the police car carrying Arthur, freeing him; he dances to the cheers of the crowd.

At Arkham, Arthur laughs to himself about a joke and tells his psychiatrist she would not understand it. He runs from the orderlies, leaving a trail of bloodied footprints. 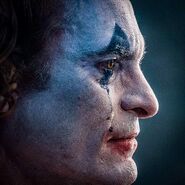 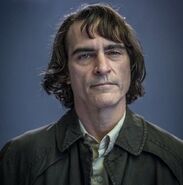 Arthur Fleck before becoming The Joker. 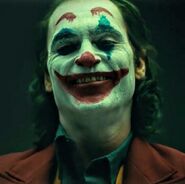 Joker Movie - "You Wouldn't Get It"

Joker Behind The Scenes with Joaquin Phoenix and Todd Phillips Warner Bros. Entertainment