Justice League: Crisis on Two Earths is the second animated film in the Justice League film series. It is loosely based on the 2000 Grant Morisson JLA: Earth 2 graphic novel.

The movie begins in a alternate universe where heroic analogues of Lex Luthor and The Joker, called The Jester, are stealing a device from the Crime Syndicate, an evil of the Justice League, Headquarters. After securing the unknown device, Luthor and The Jester attempt to escape, but the Jester has to sacrifice himself to allow Luthor a chance to get away, killing J'edd J'arkus (the Martian Manhunter opposite) and Angelique (Hawkgirl's counterpart). Lex Luthor is then confronted by the remaining Syndicate members, only to escape to the Earth of the heroic Justice League.

Once there, he turns himself into the police. The Justice League is called in and confronts the heroic Lex Luthor. Once Superman's x-ray vision confirms this Lex Luthor is from another Earth and his nemesis Lex Luthor is still at Stryker's Island, the League agrees to hear Lex out. After telling the team his story back at the Watchtower, Lex recruits them to help save his Earth from the Syndicate, who have taken control of all crime on Earth and systematically eliminated Luthor's League members. After quick debate, the League decides to help Luthor, despite their misgivings. Batman argues that the League is spread too thin to even solve the problems of their own world, let alone Luthor's. Luthor transports the remaining members of the League to his universe, while Batman stays behind to finish building the Watchtower.

The League encounters a parallel world where Slade Wilson is President of the United States. The world is being extorted by the Crime Syndicate, and the only thing holding them in check is the threat of nuclear retaliation against their base on the Moon.

Owlman is building a weapon, the Quantum Eigenstate Device or QED, which the Syndicate intends to use as the equalizer to the nuclear threat. When pressed by Superwoman, Owlman admits the weapon can destroy entire worlds. Operating under the theory that there are many parallel Earths, and that each one develops from our choices, he begins seeking Earth-Prime, the first Earth. Owlman, a nihilist, believes that destroying all of the Earths is the only action that would have any purpose. Owlman plans to destroy Earth-Prime causing a chain reaction that will erase every reality in the multiverse. Superwoman notes that even as a "murdering psychopath", she thinks Owlman is much crazier than she is.

Owlman is stopped by Batman at the last moment, who sends him to an uninhabited world that is harmlessly destroyed. Owlman has the opportunity to disarm the QED before it explodes, but in the end does nothing, saying "it doesn't matter".

Back in the Crime Syndicate's world, Johnny Quick (Flash's counterpart) dies when he creates the portal out of himself that allowed Batman to stop Owlman's plan, and the rest of the Syndicate (Ultraman, Superwoman, and Power Ring) are arrested by the U.S. Marines (brought by the Martian Manhunter), who are led personally by President Wilson.

Wilson thanks the Justice League for giving them back their world and they are sent back to their own dimension. When they return, Wonder Woman keeps the still-cloaked plane that she stole from Owlman. Because of the League's forces being spread too thin, Batman thinks about a membership drive and opens the door to the heroes (Aquaman, Red Tornado, Black Lightning, Firestorm, and Black Canary) that he had summoned for help earlier and keeps them around to start expanding the League. 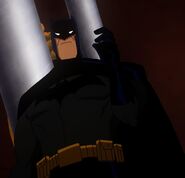 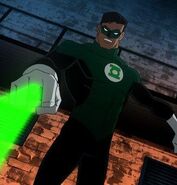 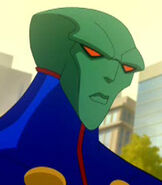 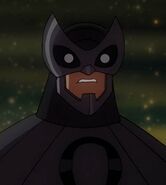