Justice League: The Flashpoint Paradox is the fourth animated film in the Justice League film series and the first film in the DC Animated Film Universe. It is based on the 2011 comic mini-series Flashpoint, which set in motion The New 52, the 2011 relaunch of the entire DC Universe.

While visiting his mother's grave, lamenting on his inability to save her when she was killed in a home invasion when he was a child, Barry Allen (the super-speed superhero known as the Flash) is alerted to a break-in at the Flash Museum by Captain Cold, Captain Boomerang, Heat Wave, Mirror Master and Top. Defeating the Rogues, he discovers that they have been hired by his arch-enemy, Professor Zoom, to lure him in as part of a plan to destroy Central City. With the help of his allies in the Justice League of America, Barry foils Zoom's plot. However, Zoom taunts over the death of Barry's mother. Despite Batman's urging not to let Zoom get to him, Barry runs off. The next day, Barry awakens to discover that the world has radically changed around him: His powers have disappeared, his mother is alive, his wife, Iris, is married to someone else, and the Justice League does not exist. In this new timeline, Aquaman and his Atlantean forces have sunk most of Western Europe, while Wonder Woman has led the Amazons in conquering Great Britain. The Atlanteans and the Amazons are at war with one another after a failed attempt at peace resulted in Wonder Woman murdering Aquaman's wife Mera. Government agent Cyborg has put together a team to end the war by taking out the two leaders, and approaches Batman to join them, but he refuses, causing the President to abandon the plan. Instead, pilot Hal Jordan is assigned to fly an alien spacecraft in a bombing run on the Atlanteans.

Barry visits Wayne Manor, but is attacked by Batman, who he realizes is not Bruce Wayne (who died in this reality) but his father Thomas Wayne. Attempting to explain things to an incredulous Thomas, Barry retrieves his Flash costume from the ring in which it is kept, but Professor Zoom's costumes appears in its place, causing Barry to believe Zoom is responsible for changing history. Convinced to help Barry by the knowledge that Bruce lived in the original timeline, Batman helps him recreate the accident that gave him his Flash powers, only for Barry to wind up being severely burned.

In London, Steve Trevor attempts to exfiltrate undercover reporter Lois Lane, but is discovered by the Amazons and killed. With Trevor's information, the Amazons hunt Lane down, but she is rescued by the local resistance and falls in with them. Meanwhile, amongst the remains of Paris, Deathstroke and Lex Luthor are attacked and killed by Aquaman's forces while tracking the energy trail of Aquaman's new superweapon: a captured and weaponized Captain Atom.

Realizing that his memories of the original timeline are fading, the injured Barry insists Batman recreate the accident again, this time resulting in the successful restoration of his powers. Although he regains his powers back, Barry discovers that he is unable to travel through time himself because there is another speedster drawing energy from the Speed Force, preventing Flash from gathering enough energy to break the time barrier.

Flash seeks to recruit more allies instead, beginning with Superman, who in this world is a prisoner of the government after his ship crashed into Metropolis, rather than Smallville. With the aid of Batman and Cyborg, they break into the bunker in which the withered Superman is held and liberate him. Empowered by the yellow sun, Superman holds off the government agents who confront the group, but then flies off in fear and confusion. Flash collapses as his memories continues to alter, and is taken to the home of Billy Batson and his foster siblings to recover. Learning of Jordan's failed attack and the beginning of the final battle between the Atlanteans and the Amazons, Flash convinces Batman to join them in an attempt to stop the war.

On board Batman's jet en route to Britain, Batman shows Flash a message intercepted from Lois Lane of a super-speedster she captured an image of, who Flash identifies as Zoom. As they wonder why Zoom would let Lois live if she saw him, the jet is shot down by the Atlantean fleet, and the battle begins. Batson and his siblings combine into Captain Thunder (the Captain Marvel of this world) to fight Wonder Woman, while Flash, Cyborg and Batman occupy Aquaman. After killing Black Manta alongside Grifter, Batman is gravely wounded by Ocean Master. At this point, Zoom reveals himself, and after brutally defeating Barry, explains that Barry himself is responsible for changing the timeline: when he went back in time to save his mother, it caused fabric of reality to fracture. The battle continues around them with Wonder Woman using her lasso to force Captain Thunder back into Batson and killing him, and Superman arriving too late to save Cyborg from Aquaman (culminating in a wounded Aquaman giving the order to trigger the Captain Atom bomb). As the explosion tears across the landscape, Zoom mocks the Flash, when he is suddenly shot through the head and killed by the dying Batman, leaving Flash to be the only user of the Speed Force in this timeline. Before dying, Batman urges Barry to fix everything, giving him a letter addressed to his son, Bruce. Barry races back in time, and stops his earlier self from preventing his mother's death.

Barry reawakens at his desk, and finds that everything is seemingly back to normal (although he is now in another new timeline with many alterations including costume changes to all the superheroes). He visits Batman to tell him about everything that occurred and gives him the letter from his father, prompting the tearful Batman to tell him: "You're one helluva messenger."

In a post-credits scene, before the Justice League had formed or even met, a Boom Tube opens in space above Earth and a horde of Parademons emerges foreshadowing the next film Justice League: War. 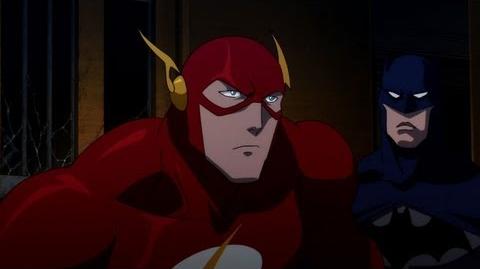