The Justice League is a team of superheroes.

After Clark Kent's funeral, Bruce Wayne revealed to Diana Prince that he planned to form a team from Lex Luthor's file subjects to protect the world in Superman's absence.

"You should shut it down or my friends and I will do it for you."
―Bruce Wayne to Amanda Waller[src]

Amanda Waller gives Bruce a file on both Barry Allen and Arthur Curry and tells her to shut down Task Force X or he and his friends will.

From DC Films Presents: The Dawn of the Justice League. 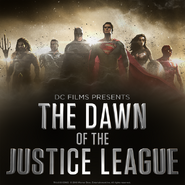 From DC Films Presents: The Dawn of the Justice League.

Retrieved from "https://dcmovies.fandom.com/wiki/Justice_League_(DC_Extended_Universe)?oldid=130463"
Community content is available under CC-BY-SA unless otherwise noted.