"You wrote that the world doesn't need a savior, but every day I hear people crying for one."
―Superman [src]

Kal-El is the last son of Krypton, when his father, Jor-El, realized that his planet was doomed, he and his wife Lara sent Kal to Earth, where he would be found by Jonathan and Martha Kent, who named him Clark Kent. Using his powers, he defends the good citizens of Metropolis from threats like criminals, particularly, Lex Luthor; Kal would then become the superhero known as Superman one of the Seven Paragons.

Opening titles reveal Superman has been missing for five years after astronomers discovered the remains of Krypton. He returns to Earth with his spacecraft crashing back into his adoptive mother's crop field, and awakes the next morning reminiscing of his childhood. He returns to work as Clark Kent at The Daily Planet in Metropolis, where he learns Lois Lane is now a mother and has won the Pulitzer Prize for her article Why the World Doesn't Need Superman. During Superman's absence, Lex Luthor has been released from prison, conned a rich widow into a sham wedding to get his hands on her money, and stolen Kryptonian crystals from the Fortress of Solitude. Luthor returns to Metropolis and experiments with a tiny fragment in a pool which grows to immense size. The growing crystal causes a blackout, affecting the take off of a space shuttle-like vehicle tethered to a Boeing 777, which Lois Lane is aboard, covering the story. Clark flies into action as Superman and stops the plane from crashing into a baseball field.

The world rejoices in Superman's return, but Lois is more concerned with the blackout. Clark meets her fiancé Richard White, nephew of Daily Planet editor-in-chief Perry White, and their son Jason. Superman is hurt when he overhears a conversation between Lois and Richard in which she says she never loved Superman. He buries himself in his work, including halting a bank heist and saving Kitty, Luthor's co-conspirator. While Kitty distracts Superman, Luthor steals Kryptonite from a museum. Perry assigns Lois to interview Superman whilst Clark investigates the blackout. At night, Lois goes out for a smoke on top of the The Daily Planet and Superman takes her for a flight, during which he apologizes for leaving her.

After her latest Superman interview, Lois focuses her attention on the blackout again and learns where it started. Lois and Jason sneak onto Luthor's ship, not realizing who owns it, and are captured. Luthor reveals his grand scheme: using one of the stolen Kryptonian crystals to grow a new landmass, supplanting the United States and killing billions in the process. He also inquires as to who is the father of Jason after noticing Lois' reaction to the kryptonite being near her son. Luthor launches the crystal (now encased in kryptonite) into the sea, causing a chain reaction resulting in its massive growth. Lois faxes their co-ordinates to The Daily Planet and is attacked by a henchman. Jason throws a piano at him in an apparent display of super strength, and after hearing news of the incident, Luthor imprisons them in a galley as he escapes in a helicopter. The landmass' growth causes destruction in Metropolis which Superman attends to, and Richard arrives in a sea plane to rescue Lois and Jason from the ship, which splits in half and sinks with them trapped inside. Superman rescues them and he flies off to find Luthor, who has returned to the landmass.

Meeting Luthor, Superman discovers the landmass is filled with kryptonite, which allows Luthor and his henchmen to beat and torture him. Luthor stabs Superman with a shard of kryptonite, after which he falls into the ocean and is left to drown. Lois makes Richard turn back to rescue Superman, and she removes the kryptonite shard from his back. Superman regains consciousness and flies back to deal with the landmass before it reaches America. Gathering more energy from the Sun, Superman lifts the landmass into the atmosphere. Luthor and Kitty escape in their helicopter, but not before Kitty tosses the crystals; she and Luthor are stranded on a desert island some time later. Superman throws the landmass into space, but weakened by the kryptonite, crash lands back to Metropolis. The doctors cannot penetrate his body with their medical equipment, but manage to remove the rest of the kryptonite from his wound. While Superman remains in a coma, Lois and Jason visit Superman at the hospital, where, careful not to let Jason overhear, Lois whispers a secret in Superman's ear. Superman later awakens and flies to see Jason, reciting his father's last speech to him as he sleeps. Lois also starts writing Why the World Needs Superman. 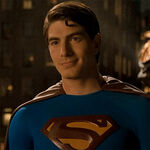 Retrieved from "https://dcmovies.fandom.com/wiki/Kal-El_(Singerverse)?oldid=131068"
Community content is available under CC-BY-SA unless otherwise noted.