Kal-El is the last son of Krypton. He was sent to Earth when his father, Jor-El, realized that his planet was doomed. He was found in Smallville, Kansas, by Jonathan and Martha Kent who named him Clark Kent and raised him as his own. They soon discovered that he had extraordinary abilities granted to him from the radiation from Earth's yellow son. He used his powers for good to defend the good citizens of Metropolis from danger as the caped superhero Superman.

The Man of Steel. The Last Son of Krypton. Kal-El. Clark Kent. Superman has many names, but to the citizens of Metropolis he is known only as their savior, one who is willing to give up his life to protect the city against whatever evil that thwarts it.

After years of flirting with Daily Planet reporter Lois Lane, the two eventually become romantically involved, even leading Superman to go as far as taking her back to the Fortress of Solitude for weekend getaways. Lois eventually became upset with Superman when he wouldn’t commit to their relationship further by revealing his alter ego. Despite being convinced Superman was really Clark Kent, Lois was unable to learn the truth when their last getaway was interrupted when the alien Doomsday began wreaking havoc on Metropolis. Immediately flying back to Metropolis, Superman engaged the genetically engineered super soldier and despite catching the monster off guard at first, the two eventually ended up taking each others lives.

Once he had enough strength again to regain conscious, the Robot revealed that while it appeared that he had died, his body had really just gone into a state of sleep to allow the body to heal more quickly from the wounds he sustained during the Doomsday battle. Through extensive retraining, the robot was able to help Superman rebuild his body back to near full strength when word came that a Superman clone was killing citizens of Metropolis. Donning a solar suit to help absorb solar energy on the flight to Metropolis, Superman armed himself with a Kryptonite Gun from the archives, once used on him by Lex Luthor, to help disable the Superman clone further.

After a battle nearly as brutal as the one with Doomsday, Superman eventually killed the evil clone. Despite worrying that the public would take awhile to accept him as their savior once again, Superman was pleasantly surprised to learn that Metropolis was incredibly glad to have him back—no matter what color his suit was.

Superman and Lois eventually retired to Lois’s apartment where the pair was able to refresh themselves after the days of hell that preceded them. It was here that Superman finally revealed his secret identity to Lois, much to Lois’s delight. 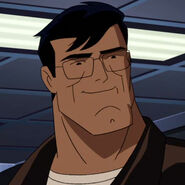 Lois Lane mourns over Superman's death.
Add a photo to this gallery

Retrieved from "https://dcmovies.fandom.com/wiki/Kal-El_(Superman:_Doomsday)?oldid=125822"
Community content is available under CC-BY-SA unless otherwise noted.