Superman is the last son of Krypton. He was born Kal-El, and when his father, Jor-El, realized that his planet was doomed, he and his wife Lara sent Kal-El to Earth, where he would be found by Jonathan and Martha Kent and given the name Clark Kent, but upon growing up and discovering the powers he gained from Earth's yellow sun, he would use his powers for good, and the world would know him, as Superman.

Superman was invited to Gotham to present the city with a cheque to help the recover from the devastating alien attack it suffered a year prior. Upon his arrival, he was attacked by Metallo and was nearly defeated by him before Batman and Robin intervened.

He had been approached by Batman about joining the Justice League but refused several times. After beating Metallo, Batman kept his Kryptonite power source to Superman’s annoyance. Superman retaliated and used his x-ray version to learn that Batman is really billionaire Bruce Wayne.

Superman disguises himself as Clark Kent, a bumbling but well meaning reporter, he does this to fool those around him because no one would ever believe a nerd like Clark Kent could be The Man of Steel.

Wayne later exacts revenge and discovers that Clark and Superman are one and the same by studying his flight patterns and finding his apartment. He was later manipulated by Lex Luthor using Kryptonite induced plant spores stolen. Using Superman as his tool, Luthor attempted to create a mass army of robots to attack Earth’s weaponry systems.

After an epic clash with Batman in the Batbot, the Dark Knight managed to bring The Man Of Steel around by overriding his system with weedkiller to counteract the effects of the plant spores. Batman, Robin and Superman then stopped Luthor from launching his mass army of robots before finally locking Luthor behind bars.

Following Luthor's defeat, he approached Batman about finally joining The Justice League, while requesting that Batman keep the kryptonite so that it stays in the hands of someone he trusts. 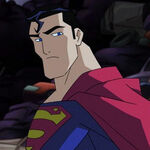 Superman during his first teamup with the Batman. 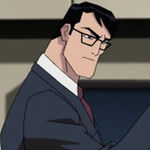 Retrieved from "https://dcmovies.fandom.com/wiki/Kal-El_(The_Batman)?oldid=118449"
Community content is available under CC-BY-SA unless otherwise noted.