Kal-El was saved from the destruction of his home planet Krypton when his parents sent him to Earth in a spaceship. On Earth, under the yellow sun, Kal-El gained amazing abilities, raised as Clark Kent by farmers Jonathan and Martha Kent, he grew to understand and master his abilities and fight crime with the morals that he was raised with as the superhero known as Superman. After over fifty years as a superhero, he gradually became a pawn for the President and the United States Government.

After Batman's defeat of the Mutant Leader and the rise of the gangs that had splintered from the Mutants, the President called in Superman to have a word with Batman to see if he could make him fall in line and keep a low profile.

On his way to Gotham City to speak with Batman, Superman stopped a subway train from hitting a blind man who had fallen onto the tracks. He located Bruce and incapacitated Bruno, holding her against the wall with some bent metal pipes. Bruce told Superman to meet him at his place in the morning, Superman agreed and left.

Clark visited Bruce and tried to talk him out of continuing his activities as Batman to no avail. He overheard the President giving a speech and had to leave, promising they'd finish talking later. He flew to the Corto Maltese to intervene in the fighting that was breaking out between the US Army and the Soviets.

Superman intercepted the Russian missile that was headed to the Corto Maltese. He pushed it off course and it exploded. The radiation weakened Superman as he absorbed it all and fell to the Earth. He absorbed the solar radiation from the plant life to regain his strength.

Clark spoke with the President in Washington, D.C. and was given the order to deal with Batman. He used his heat vision to ask Bruce where their showdown would take place. Bruce replied Crime Alley.

Superman and Batman fought in Crime Alley, with the help of Robin and Oliver Queen, Batman got the upper hand and defeated Superman until his heart stopped and he collapsed. 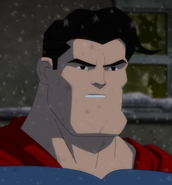 Retrieved from "https://dcmovies.fandom.com/wiki/Kal-El_(The_Dark_Knight_Returns)?oldid=131253"
Community content is available under CC-BY-SA unless otherwise noted.