Koriand'r is a Tamaran Princess living on Earth who goes by the superhero name of Starfire.

Koriand'r was a princess on her homeworld, a harsh realm, but was forced to leave when a coup was staged. She was essentially exiled and found her way to Earth. She was befriended by Dick Grayson, Nightwing, and the two took a liking to each other. In residence at the Titans Tower, Starfire led the Teen Titans and mentored powered youths in need of help.

While Dick watched over Damian Wayne at Wayne Manor, Grayson received a phone call from Koriand'r. To his dismay, she was wearing red with lace and a thong. Grayson asked her not say anything more and promised he would make up for his absence the next night.

She and Dick had plans for a date at Titans Tower, but it was cancelled by Dick after a fight with Blockbuster and an emergency call from Alfred.

After the unveiling of the Hall of Justice, Robin was sent to train with the Teen Titans to learn how to be part of a team. After a day, Blue Beetle finally had enough of Robin disrespecting Starfire and the two fought. After the Scarab blasted Robin, Starfire flew to his side and confirmed he was alive but barely. Raven was able to heal him. Later that night, Starfire was not pleased to see Robin had trespassed in her room and was looking for files on Raven. He didn't find much and admonished her for not vetting. Starfire insisted faith was important. Robin countered faith was belief in the absence of data and that invited disaster.

Starfire held a video chat with Nightwing and expressed her frustrations with Robin. She admitted Robin reminded her of her sister. Nightwing reminded her he didn't have a proper and fun childhood but was raised by assassins then moved in with his father, Batman. Starfire got an idea and thanked Nightwing then signed off before he could ask what. Starfire took the Titans to a carnival for a night of mandatory fun and bonding. Later into the night, Raven was attacked by Trigon's Corruptors. Starfire declared, "Titans, go!" and everyone switched to their uniforms. Even Raven dispatched the demons. Starfire inquired what was going on. Raven teleported the Titans to Azarath and told the truth about her past and father, who was Trigon, an interdimesional conqueror and demon. Starfire agreed with Robin that Raven should stay with the Titans instead of running away to keep Trigon off her trail. The Justice League suddenly arrived and asked Raven to come with them for questioning. Robin and then Raven refused. Starfire attempted to break the tension but the Corruptors arrived and possessed the League.

Starfire fought Wonder Woman but was no match. Wonder Woman threatened to break her neck with the Lasso of Truth. Raven conceded and ordered the Corruptors to spare the Titans. 24 hours later, Cyborg regained consciousness. Starfire asked him how they could save Raven but he had no answers. Robin had a plan of his own. Cyborg, Starfire, and Blue Beetle flew through a Boom Tube to the Middle East and lured Superman to them with an onslaught. At the last second, they scattered and Robin stabbed Superman with Kryptonite and freed him. The Titans went for Raven but it was too late. Trigon arrived. The Titans and Cyborg went to Trigon's realm and imprisoned him in a shard of crystal he escaped from. 10 days later, the Justice League confirmed there were no more signs of the Corruptors. The League congratulated them on saving the world and them. Starfire agreed with Wonder Woman and was proud of the Titans.

Starfire and the Titans are recruited by the 2003 and 2013 Titans into "The Teen Titans of Infinite Earths" to battle the near-omnipotent 2013 Trigon.

Two years later, the remaining surviving heroes are attacked by Starfire and other converted Furies, Martian Manhunter, Mera, Wonder Woman, and Hawk. Starfire fights Raven before dealing with Wonder Woman, who regained her senses after Constantine's Lasso of Truth magic spell. Starfire also regains her senses later when Superman regains his powers and Trigon is released from Raven's mind and deal with Darkseid. 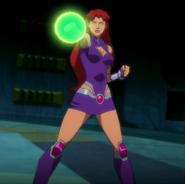