"How do you find someone who has spent a lifetime covering his tracks? You start with the urban legends that have sprung up in his wake, all of the friends of the friend who have seen him. For some, he was a guardian angel. For others, a cipher, a ghost who never quite fit in. As you work your way back in time, the story begins form a pattern."
―Lois Lane[src]

Lois Joanne Lane is a Pulitzer prize winning reporter of the Daily Planet and the girlfriend of Kal-El.

Lois Lane, top reporter for the Daily Planet, arrived in a northern region part of Canada to investigate a unique discovery that had been unearthed and was currently being kept under-wraps from the public by the military. Lois met with Colonel Hardy, Dr. Hamilton and Officer Sedowsky who informed her that the artifact buried deep within the ice was at least 18,000 years old. During her stay on the site, Lois witnessed a mysterious man roaming the site at night. Lois followed him to a recently melted cavern entrance that burrowed deep within the ice until it led directly to the epicentre of the artifact which was revealed to be an ancient alien spacecraft. Lois continued to follow the man and attempted to take a photo but accidentally activated the automated sensors which attacked her. Lois was rescued by the mysterious man who crushed the sensor. The man saw that she was bleeding exponentially and cauterizes the wound with his heat vision. She passed out from the pain.

Lois awoke to find herself outside on a small glacier in the middle of the ocean where a military helicopter found her. She returned to Metropolis intending to write her story, but unfortunately, Editor-and-Chief of the Daily Planet Perry White refused to print it since the military would deny the story even occurred and Lois had no solid proof. Lois, not wanting to drop the story, sought out gossip journalist Glen Woodburn to spread the story all over the internet while she retraced the steps of her rescuer. Lois followed all of the leads regarding miraculous rescues occurring all over the globe by a man until she found the original source in Smallville, Kansas.

Lois interviewed Pete Ross which led her directly to Martha Kent, where she learned the name of her rescuer was Clark Kent. Lois encountered Clark in the cemetery at the grave of his father Jonathan Kent, Clark told her his story and why he didn't want it to be told to the world, in fear of being rejected for being an alien with God like abilities. Lois came to respect and admire Clark for what he's doing and decided to drop the story. Returning to the Daily Planet, Lois was reprimanded harshly by Perry who was furious at her for leaking the story to Woodburn, Lois accepted her punishment of two week lay-off with no pay. Perry admired her for choosing to drop the story as it would cause mass panic to the public if the world learned of the existence of a being like this but knew it was uncharacteristic of her and suspecting her leads did take her to the source.

Lois and Perry were summoned by Steve Lombard who told them to watch a mysterious transmission that was emitting from every form of telecommunication with a message stating "YOU ARE NOT ALONE". General Zod then appeared on the screen, requesting that "Kal-El" turned himself over to him in twenty-four hours or the planet would suffer. Lois realized that Zod was referring to Clark and saw out of the window that Zod's ship was descending upon Metropolis. As newscasters and journalists all around the world began to panic, Woodburn betrayed Lois by declaring that she knew who the alien was to which Lois tried to flee but was apprehended by the FBI. Kal-El, now dressed in a colorful red and blue Kryptonian attire, appeared before the military, surrendering himself to be handed over to Zod but under one condition - that he could speak with Lois Lane first.

Inside a military institution, Lois interviewed the handcuffed Kal-El, finding it amusing that Clark would allow himself to be captured let alone be restrained by handcuffs. He told her that he did it as a show of good faith and it made the military feel like they were in control. Lois asked Clark what the "S" on his chest stood for. Clark stated that it wasn't an "S", but a symbol of hope. They were then interrupted by Emil Hamilton who began to question Kal-El from behind a window in the other room. Clark used his x-ray vision to see him with Hardy and General Swanwick plus additional military personnel. He broke free of the handcuffs with ease and approached the window saying that he was not their enemy but he believed Zod would be.

Lois accompanied Kal-El to the coordinates that Zod had requested. Clark thanked her for believing in him and requested that she return to the military despite her unwillingness to depart from her side. A Kryptonian craft appeared in the distance and Lois returned to the military barricade. Lois watched as Faora-Ul descended from the craft to greet Kal-El, she requested that Lois accompanied them as well. Colonel Hardy began to refuse but Lois agreed to go with them.

Inside the craft, Faora placed a Kryptonian helmet on Lois to allow her to breath aboard Black Zero, Zod's Mothership, Clark also slipped Lois the command key to keep safe. Once aboard the ship, Zod greeted them, unfortunately, Clark's body struggled to adjust to the natural Kryptonian environment and he began to weaken and cough up blood. Lois showed great concern for Clark, pleading that they help him.

Lois was then separated from Clark, while her mind was being probed for any useful information she might have regarding Clark. After being placed in a prison cell, she noticed a keyhole with a diamond pentagram on the wall, she inserted the command key into the hole, activating Jor-El's holographic program into the ship mainframe. Jor-El guided her through out the ship and also reprogrammed the ship's environment to reactivate Clark's powers. Leading her to an escape pod Jor-El gave her crucial information to give to Clark regarding how to stop Zod's plans.

Lois's pod was fired upon by Zod's ship causing damage upon re-entry to earth. As fire appeared around the pod encasing her, Lois caught a glimpse of Clark soaring down after her and he rips open the pod using his super strength, grabbing her and wrapping his cape around her to shield her from the blast of the explosion from the pod. Then he lowered her gently down into a cornfield.

Lois apologized to Clark as she told him that they probed her mind to find information about him. He told her they did the same to him so she shouldn't worry. Clark realized his mother was in danger and quickly launched up into the sky flying at super speed towards the Kent Farm. Lois saw an approaching police car and commandeered the car to head to the Kent Farm as well.

Upon arriving at the farm, Lois saw the destruction that Zod had caused and found Martha and Clark among the remains of the Kent house. Lois told Clark what Jor-El had told her. Using his ship they could send the Kryptonians back to the Phantom Zone. With assistance from the military they'd fly his ship directly into Black Zero causing a black hole while Clark would stop the world engine in the Indian Ocean.

Lois and Dr. Hamilton accompanied Colonel Hardy aboard an air carrier with Kal-El's ship in tow with an intended aerial strike in Metropolis towards the Black Zero. Lois prepared to arm the ship using the command key but it malfunctions. Suddenly without warning, Faora appeared on board the ship and dispatched the military personnel with easy until she re-encountered Colonel Hardy. Meanwhile Emil and Lois tried to figure out the solution to the key as Zod appeared behind them in the ancient Kryptonian Scout Ship, preparing to fire as Clark appeared and crashed directly into the ship. Emil saw the problem as the ship wasn't aligned properly and solved it, starting the ship and causing a massive shock wave which sent Lois hurtling out of the air carrier plummeting down towards Metropolis.

Clark emerged from the rubble of the Kryptonian Scout Ship and saw Lois falling in mid air so he took flight and caught her just as the portal of the Phantom Zone began pulling the Kryptonians and their ships into the Zone. Clark, with all of his might, pushed through the vortex and saved Lois, flying her down to safety. In the mist of the Metropolis ruins, she and Clark began to kiss passionately but were cut short by the reappearance of Zod who was extremely outraged at Kal-El for choosing to protect humanity rather than the survival of his own Kryptonian race. Clark engaged in a serious battle against Zod in Metropolis and space as Lois watched.

The battle reached its climax in Metropolis train station, where Zod used his heat vision, threatening to incinerate a helpless family who were pinned against a wall, leaving Clark little choice but kill Zod, snapping his neck. Clark was devastated by this act, but Lois saw the whole event unfold and was there to comfort him.

In the following week, Lois was at her desk in the Daily Planet busy writing a story when Steve Lombard asked her out on a date, offering her tickets to a basketball game. Lois, uninterested, suggested he try his luck with the interns. Perry then introduced a new reporter to her, Clark Kent who was now wearing a pair of glasses to help hide his identity . Lois "Welcome's him to the Planet" to which Clark smiled and thanked her.

"This means something. It's all some people have, it's all that gives them hope."
―Lois Lane[src]

Lois invited Martha to have some coffee at the Daily Planet where they talk about having financial issues with the bank, before they get interrupted by a Daily Planet employee who replaced Lois as a reporter, asked her about a source, which Lois lies saying it's a she. The two would talk about Clark, which Martha brings up that Clark said to her one time that Lois was always hungry to find a news story.

Before Superman could kill Batman, Lois arrives with Alfred to calm Clark down, after reuniting Clark leaves with Lois back to the Kent Farm. After a day, Clark fully regains his memories and reunites with his mom after a tender moment with Lois. Lois then warns him about Steppenwolf and regretfully sends him away. After the battle is over, Clark and Bruce return to Kent Farm, with a bunch of movers bring back all of Martha Kent's property. Clark thanks Bruce for getting the property back from the bank and wonders how he did it. Bruce reveals he bought back the bank, Lois gives Clark a gleeful smile as she enters back into the house with Martha. 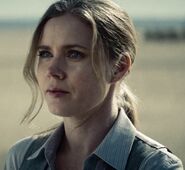 Lois and Superman with Faora aboard Zod's ship.

Lois and Clark before kissing.

Amy & Henry photo-shoot.
Add a photo to this gallery 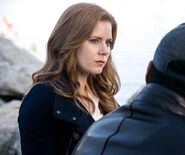 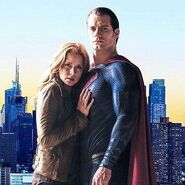 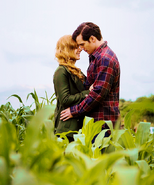 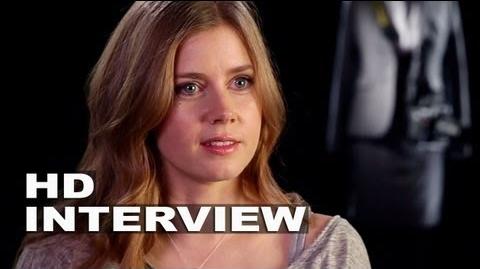 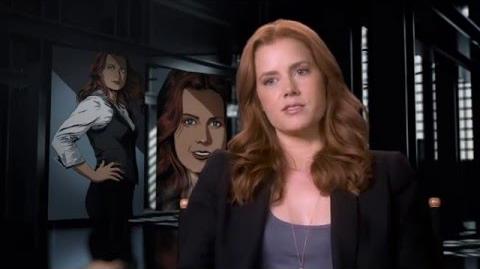 Retrieved from "https://dcmovies.fandom.com/wiki/Lois_Lane_(DC_Extended_Universe)?oldid=124725"
Community content is available under CC-BY-SA unless otherwise noted.