DC Movies Wiki
Register
Don't have an account?
Sign In
Advertisement
in: Animated Films, Scooby-Doo! & Batman: The Brave and the Bold

Scooby-Doo! & Batman: The Brave and the Bold

Scooby-Doo! & Batman: The Brave and the Bold is a animated crosssover movie which features Mystery Inc and Batman taming up.

Batman drives a ghost which the gang is chasing away, and warns the gang to keep away from this case for their own safety. When the Puppeteer attacks again, Fred overpowers Perpetto and his hench-puppet, and the gang unmasks them as Martian Manhunter and Detective Chimp. As Batman and his associates reveal afterwards, the Puppeteer scam was actually an initiation test for Mystery Inc. to join the ranks of Mystery Analysts of Gotham.

Mystery Inc. arrives at the Analysts' headquarters, where they additionally meet Question, Black Canary and Plastic Man, as well as Aquaman. Mystery Inc. is asked to take the lead in the next case for the Analysts. When an alarm sounds from Gotham Chemical Storage, the assembled Mystery Analysts head for the warehouse, where they find that several phials with a radioactive isotope have been stolen. A red-cloaked figure from the old theater appears before them, calling himself Crimson Cloak and swearing revenge on Batman and Gotham for making him into a ghost. Crimson Cloak sets the storage on fire, but the Analysts escape the blast with Plastic Man's help.

While the superheroes put out the fire, Batman sends Mystery Inc. to a diner to rejoin them later. Following the gang's questions, he reveals the tale about his single unsolved case. Many years ago, at the start of his crime-fighting career, Batman attempted to stop Professor Milo from completing an experiment with faulty teleport technology. However, the vortex created by the device killed one of Milo's assistants, Leo Scarlett, a failure that has haunted Batman since that time. They conclude that the likely suspects behind the Crimson Cloak would be either Sam Scarlett, Leo's father, or Riddler.

Batman and Mystery Inc. visit the Riddler at Arkham Asylum. Batman, Fred, Daphne and Velma re-encounter Crimson Cloak, who releases the other inmates from their cells. The investigators just barely manage to escape their clutches and seal them inside the asylum. As they return to the Mystery Machine, they are intercepted by Harvey and the other Mystery Analysts (sans Aquaman), who attempt to arrest them for the isotope theft due to fake evidence planted in the van. Batman and Mystery Inc. make a run for it.

Shaking off their law-enforcing pursuers, Batman takes the gang to the Batcave and leaves them there to return to Milo's old laboratory for clues. Rejoined by Aquaman and Question, who refuse to believe the false accusations made against Mystery Inc., Batman finds Milo's teleporter restored by Crimson Cloak, who promptly attacks and incapacitates the heroes. Later, Batman awakes to see himself, alongside Aquaman, tied above the teleporting machine.

At the same time, when Velma attempts to analyze the footprint in the clay, the clay suddenly comes to life and attacks. After overcoming it with a Bat-Dehydrator, Mystery Inc. deduces the villain's true identity for themselves: Clayface. They try to inform Batman, but learn that he has been captured by the Cloak; and after equipping themselves with the old costumes and gadgets of Batman's former sidekicks, they arrive just in time to stop the teleporter and incapacitate Clayface with the Dehydrator. Defeated and exposed, Clayface admits that he restored the machine for the Riddler and stole the isotopes to power it, in return for a cure against the gradual decay of his body. The Riddler sitting in Arkham is revealed to be a clay decoy, and the Question is unmasked as the real Riddler, who had taken Question's place during the fight before the Analysts' meeting.

Before he can be taken into custody, however, the Riddler escapes back into the lab. He reactivates the teleporter and prepares to use the vortex's power as a superweapon to destroy Gotham, but is knocked out by the Question. The vortex grows out of control, but at the same time a human shape begins to manifest in it. Working together, Mystery Inc. and the super heroes reverse the device's polarity, allowing Batman and Scooby to drag the figure free of the vortex before the machine self-destructs. The figure is revealed to be Leo Scarlett, who was not disintegrated by the vortex but instead caught in an interdimensional void, and is now happily reunited with his father.

With the mystery solved, Batman thanks the gang for all their help, they call him a big "Teddy-Bat", and he takes off into the night as the story ends. 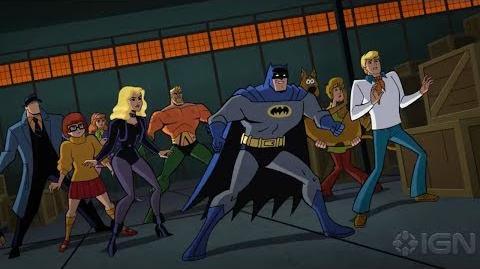 Scooby-Doo! & Batman The Brave and the Bold - Trailer Debut