Superman II is the 1980 sequel to Superman: The Movie. The plot of the film is that Superman must fight three Kryptonian criminals named Non, Ursa and General Zod, but he has also decided to follow his love of Lois Lane. In 1983 a sequel, Superman III, was released.

The film begins with a prologue in which General Zod and his co-conspirators, Ursa and Non, are banished to the Phantom Zone by the Kryptonian elders as punishment for their crimes. The story then moves forward in time. Clark learns from Perry White that Lois is in France, where terrorists who have seized the Eiffel Tower and threatened to level the city with a hydrogen bomb. While in the course of rescuing Lois, the bomb is activated and Superman throws the elevator out of the atmosphere and into deep space, where it explodes. The shockwaves shatter the crystalline conduit into the Phantom Zone, now floating near Earth and Zod, Non, and Ursa are released. Lex Luthor, meanwhile, finally breaks out of jail with the help of Ms. Teschmacher using a hot air balloon, but leaves Otis behind as bait so he can escape. Using the black box device, he goes north to the Fortress of Solitude. Luthor, activating the Fortress control panel, then learns from hologram recordings of Jor-El about the three Kryptonian villains who have escaped. He decides that he will collaborate with the Kryptonian villains to defeat Superman and take over the world.

Clark and Lois are on assignment in Niagara Falls, Ontario, investigating what Perry calls a "honeymoon racket." Superman rescues a boy who falls over the railing, and Lois suddenly decides it is far too convenient that Clark disappears every time Superman makes an appearance. She tries to prove it by jumping into the Niagara River, screaming for Superman to save her. Clark never changes identities but, unbeknownst to Lois, uses his heat vision to break off a tree branch for Lois to use to stay afloat. However, later in their hotel room, Clark's powers are revealed when he quickly retrieves his fallen glasses from the fireplace with his bare hands. Realizing that he wasn't burned, Lois realizes the truth. After some hesitation, Clark admits the truth and takes Lois to the Fortress of Solitude, showing her the crystals which created and control the operations; Lois leaves the primary green crystal under her purse, outside the control panel. Kal-El speaks to his father through hologram about his desire to give up his responsibilities as Superman so he can live a normal life with Lois. Jor-El criticizes Kal-El for his decision, but nonetheless offers him a choice. In order for him to relinquish being Superman, he must enter a crystal chamber and be exposed to harnessed rays from the Krypton red sun. He will, therefore, lose his powers permanently and no longer be invulnerable as he has been before. Despite his father’s pleas to reconsider, Kal-El, without hesitance, enters the chamber and undergoes the de-powering process, which culminates in the destruction of the crystal control panel. The two retire to his bedchamber and sleep together.

Meanwhile, the three Kryptonian criminals have devastated a joint NASA-Soviet moon expedition, killing three astronauts. They fly to Earth, which they believe to be a planet called "Houston" (having overheard radio transmissions with Mission Control in Houston, Texas). They wreak havoc on a small town, easily defeating the U.S. military. After defacing Mount Rushmore, the trio attack the White House, where Zod forces the President of the United States to kneel before him.

On October 6, after returning from the Fortress of Solitude, Clark is beaten up in a diner by a bullying truck driver. His despondent mood worsens when, in horror, he watches the President announcing the surrender of Earth to General Zod. The President suddenly pleads for Superman's help and Zod issues a challenge to Superman to face him. Realizing the danger posed to the world and the terrible mistake he made, Clark heads back to the Fortress, now a darkened sanctum, and calls out to his father for help. Dreading that there may be no hope left, he then notices He sees the green crystal glowing where Lois accidentally left it– the same crystal that has called out to him in the first movie. He uses the crystal to activate the panel, and once more, Jor-El emerges in hologram. He tells Kal-El about his terrible mistake and offers him one last resort to regain his powers – he will channel all of his remaining energy to his son, thereupon dying. Jor-El bids farewell and emerges in full body and spirit; upon touching Kal-El, he restores his son’s powers and dies by fading away. Kal-El emerges once again…as Superman. He sees the green crystal glowing where Lois accidentally left it.

Lex Luthor visits a bored Zod at the White House and negotiates a means to lure Superman to the villains by holding Lois hostage. He also reveals that Superman is the son of Jor-El, their imprisoner. They arrive at the Daily Planet offices and seize Lois, only to be interrupted by the arrival of Superman, his powers fully restored. A destructive battle ensues among the four Kryptonians as Superman struggles with the new experience of battling multiple enemies of his power level. During the battle, Ursa and Zod discover Superman's weakness, his concern for human life, and use this against him. Finally, Superman flees, seemingly in defeat. Luthor convinces the villains that they must pursue Superman to his Fortress.

At the Fortress of Solitude, Superman attempts to distract the villains with a hologram that creates multiple images of himself. However, after grappling with Zod, Ursa and Non threaten to tear Lois limb from limb, and Superman agrees to release Zod and capitulate to them to spare her life. Superman manipulates Luthor into tricking the criminals, counting on Luthor to double-cross him. Superman is forced into the same depowering chamber he used before, and the red light that drains super-powers is actually set loose on the Fortress while Superman is safe inside the chamber. Superman feigns weakness and then crushes Zod's hand after seemingly accepting it in submission. Lois easily dispatches the now-powerless Ursa, and Non leaps towards Superman, only to find he can no longer fly. All three villains fall into the depths of Superman's fortress, apparently to their dooms. Superman and Lois, leaving Luthor stranded in the Fortress and fly away. Superman then uses his heat vision to destroy the Fortress. He then turns back to Lois, who realizes and agrees that Superman must continue to serve humanity, conforming to his father's wishes. After Superman flies her home, Lois begins to break down in despair. Although life would never be the same, she heartbreakingly assures Superman that she can be trusted to keep his secret identity, which Superman acknowledges consolingly, and he flies off. Superman, realizing that life with Lois can never be, decides to turn back time, flying around the Earth at tremendous speed and reversing events that have occurred throughout, such as the destruction and mayhem done to Metropolis during Superman's battle with the villains and the shattering of the Phantom Zone that releases the Kryptonian villains, as well as Lois' knowledge of his secret identity. The status quo is finally changed back to normal, although both Lois and Perry White seem to experience a sense of déjà vu.

Clark, now with his powers restored as Superman, goes to the diner and confronts Rocky, who is more than willing to pick a fight with him. Much to everyone's surprise, this strange, young man handles the bullying customer like a little child, eventually felling him across the counter and sending him crashing into the pinball machine, knocking him unconscious. Clark then offers to pay the owners of the diner for the damage. With those around wondering how the stranger was able to beat the bully, Clark simply replies:

The film closes with Superman restoring the American flag atop the White House and assuring the President that he'll always rescue the Earth.

The film was shot in Paris, France, Norway, English, St Lucia, and parts in Canada. 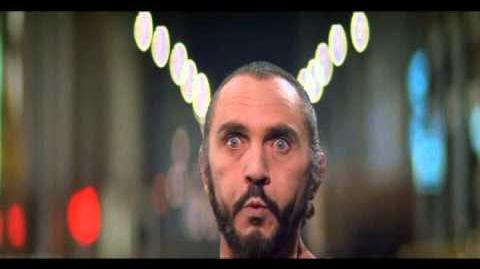