Superman III is the third installment in the Superman series after Superman: The Movie and Superman II. It involves Superman fighting a corporate buisness man who is bent on controlling the world through his corporate holdings, and also features Superman sucumbing to the dark side of his personality, due to the affects of imperfect Kryptonite. A fourth film, Superman IV: The Quest for Peace, was released in 1987.

In this third installment, a computer genius named Gus Gorman is brought into the employ of Ross Webster, who has designs on ruling the world. However, all of his schemes are thwarted by Superman. Webster then orders Gorman to use his computer knowledge to create synthetic Kryptonite after remembering a Daily Planet story about the last original chunk disappearing years earlier after falling to Earth. (Whether Webster is referring to the Kryptonite robbery in Superman is unclear.) After scanning the coordinates of Krypton's former location via satellite, the results show a small percentage of an unknown component. The substitution of tar (which Gorman used after glancing at a cigarette carton) for a crucial, but unknown, component resulted in the synthetic kryptonite behaving like Red and Black Kryptonite: in this case, turning Superman evil and eventually split him into two people.

Bizarro and Clark Kent, the embodiment of Superman's remaining good qualities, engage in an epic battle at a deserted junkyard, where Clark emerges victorious and Bizarro fades from sight.

Later, Gorman's greatest creation, the Ultimate Computer, severely weakens Superman with a Kryptonite ray before Gorman has a change of heart and attacks his own machine. The computer starts to malfunction and Ross, his sister Vera and his girlfriend/assistant, Lorelei Ambrosia realize there's a danger. Ross and Lorelei are able to escape from the control room, but Vera is sucked into the huge circuitboard. The computer transforms her into a robot and she attacks the other two. Superman arrives, and destroys the computer, turning Vera back to normal. He then flies away, taking Gus with him.

There is a subplot in this film detailing Clark Kent's return to Smallville for his high school reunion, where he reconnects with Lana Lang (Annette O'Toole), an old childhood friend. Lana is now a divorcee with a son named Ricky (Paul Kaethler). Lana's former boyfriend Brad (Gavan O'Herlihy), a former jock and Clark's childhood bully, is now a security guard and is still vying for her attention.

The film was shot in Utah, Italy, England, Arizona and Canada. 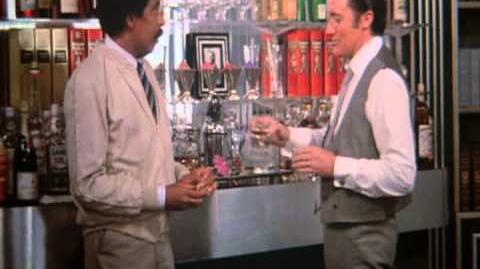